The Zlin Dog is a street dog! As a competition for student films, it might stand a bit aside from the regular programme, but it often attracts among the most interesting films and filmmakers. Jury members Marta Jodko, Martin Kotik and Angelos Kovotsos definitely don’t look like street dogs, they are fast as a greyhound, proud as a poodle, smart as a Labrador, determinate as a Pitbull and loyal to the bone. Ladies and gentlemen, we proudly present you the “Zlin Dog Jury”. 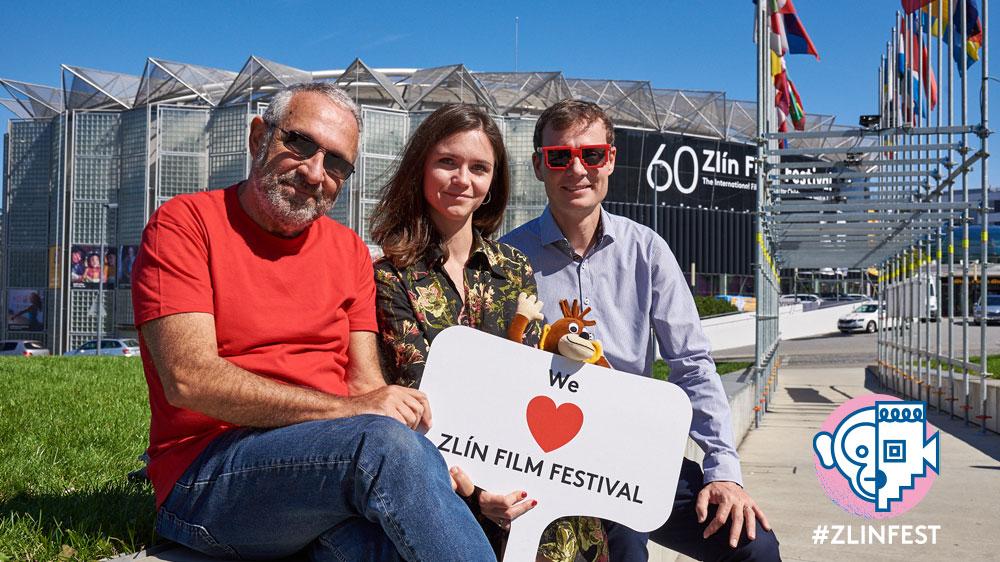 What is this Zlin Dog all about?

Marta: It is a student film competition. We are watching 60 short films in 3 categories: live action, animation and documentaries.

Let’s see how good you know each other after 5 festival days. Who has been drinking the most?

Marta: If I’m the drinker, then Martin definitely is the talker.

Who has been falling asleep the most during screenings?

Unanimously: None of us! Our jury secretary Anne would never allow that to happen.

Can you share with me some crucial information about your fellow jury-colleagues?

Marta: Martin is very much into animation and Sachertorte.

Marta: And Angelos is genuinely super nice, and knows very well how to explain things.

Marta, if you as a festival organiser could steal something from the Zlin festival and take it with you to the AleKino festival, what would that be?

Marta: The time of the year, when it is nice and warm, and kids are invited to come out and play in the park. I adore all the activities going on here in the park during the festival.

Marta: Yes, the fireworks too, but I would feel guilty about scaring all the cats and dogs in town.

You’re currently visiting one of the rare festivals that is actually physically taking place. How much have you been missing the festivals?

Martin: It has been half a year, since the beginning of March, and of course I missed it enormously, mainly the networking and meeting with people from different countries.

Marta: The first night in Zlin for me was euphoric. Finally getting together again with friends, talking and laughing, felt extremely liberating.

I would love to hear some of your impressions on the city of Zlin.

Marta: Great architecture, plenty of green nearby the centre, and beautiful hills surrounding the city.

Angelos: There’s hills everywhere in the world, even in Athens!

Marta: Not where I come from. And I like the festival’s visibility inside the city centre. Everything is about the festival, it spreads all over town and adds to the lovely atmosphere.

Martin: I like the dynamics of the city, with all these young people and university students. It feels like a very progressive city and I really like it.

Watching these films, what does it tell you about film students nowadays?

Marta: They are creative.

Angelos: Their work looks impressively professional. It gives hope for the future, especially for the animation and animated documentaries, which is an interesting trend. It inspired me to include animation in the project that I’m currently creating.

Marta: Their films deal with a broad spectrum of themes, about important problems in the world of today, but also about emotions. Some films use a delicate approach, others are very straight-forward and intense.

Martin: Students seem to be very sensitive and they care about the future.

Would you perhaps have some advice for them for the future?

Marta: And go deeper and deeper into the topic. Don’t stay on the surface.

If you could pick one person from the entire film history that you would like to see serving as a mentor for students, who would that be?

Angelos: Orson Welles, although I’m not sure if he had the skills required to be a good mentor. Maybe Fellini then.

Marta: Stanley Kubrick, as he always wanted to be in control of everything.

Martin: In terms of animation, I would say Chris Meledandry, the producer of the ICE AGE and DESPICABLE ME franchises, or Genndy Tartakovsky, the director of HOTEL TRANSSYLVANIA.

If you had a massive budget to invest in a student film project, how would you spend it?

Martin: I would never do it, I’m a responsible person.

Angelos: It should be forbidden for students to work on a big budget.

Marta: But you could spend it on workshops, formations, scholarships, consultations, travel budgets, … I think it is better to invest in ideas rather than in the making of a film.

Angelos: Or in a festival where they would get interesting feedback.