I think the Int’l Expert Jury for Children’s Films would not only get along during a festival, they even could grow old together. I can perfectly imagine directors Johanne Helgeland (THE CROSSING) and Vit Karas, and sales & distribution expert Claudia-Rudolph Hartman run their little bookshop together, as two distinguished ladies and one true gentleman. They would serve tea to the costumers in little cups with a flowery imprint. 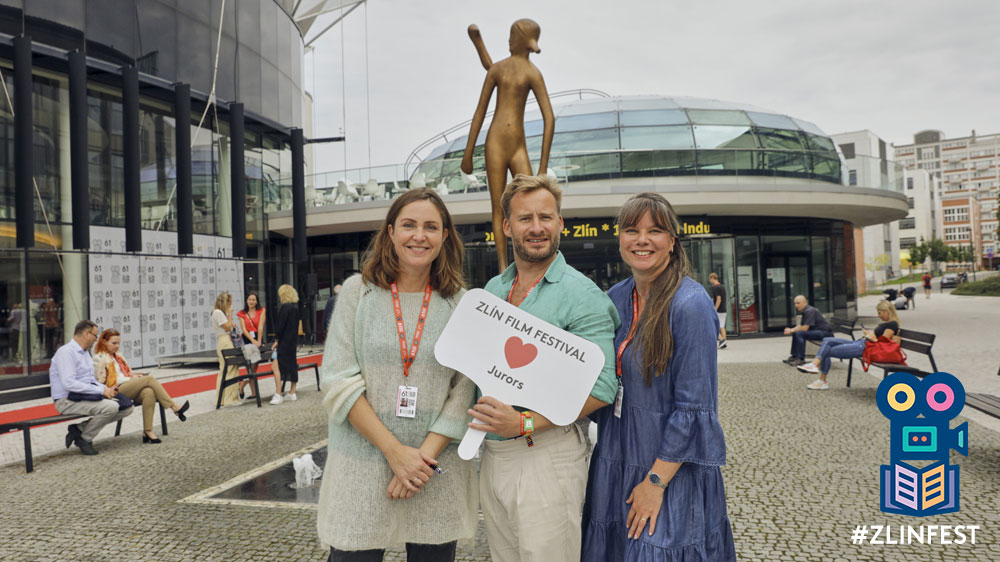 Vit: Even if this wouldn’t be true, I’ll take this one on me.

Claudia: What a gentleman’s answer; thanks you so much!

Claudia: Vit! Since he is Czech, he was often guiding us around.

Vit: And since apparently I have been drinking a lot, I easily started talking.

Vit: That was a micro sleep; it took only a few seconds.

Johanne: You did? I didn’t even notice. You must have done it very secretly.

If you were a festival organiser and you could steal one thing from this festival to take it home with you, what would you steal?

Claudia: The hospitality! People here were so nice; we felt welcome from the very first moment in the festival; that was exceptional!

Vit: The same for me.

Claudia: My advice would be: if you come to Zlin, make sure to bring sneakers with you. Everything is within walking distance, but being on your feet so often, sneakers are better than high heels.

Johanne: But don’t forget the high heels neither; dress codes are common here.

Vit: At university, the legendary director Otakar Vavra taught us: when preparing a shoot, be aware you should find yourself a good tailor, but also make sure to wear comfortable shoes.

In the films that you saw here, which mature character would you like to get to know better, and maybe ask out on a date?

Claudia & Johanne (simultaneously): From a female perspective, I would say the father in SPACEBOY was very nice. Asking him on a date could be fun… theoretically speaking. We wouldn’t do that for real!

Vit: Even from my perspective, he was the right choice. We didn’t have many female characters fitting that occasion.

Claudia: THE THREE INVESTIGATORS, a series about young detectives meeting Hitchcock, have been popular for decades in Germany. I would pick an art-house director like François Ozon, to see if he would be able to get into the hearts and souls of children.

Johanne: It would be interesting to see Mike Leigh using his methods with child actors.

Johanne: After many years, I recently saw THE BREAKFAST CLUB again, and I was surprised how it still made me laugh.

Claudia: I haven’t been to the cinema for ages. My most recent crying experience was in this festival with the touching Korean movie KIDS ARE FINE.

Vit: I was at the premiere of PRVOK, SAMPON, TECKA A KARELA, a Czech buddy movie about four friends turning 40, on the edge of a midlife crisis. It was done in a funny way; I laughed a lot, which is not a common thing for me nowadays.

Claudia: I would have a bookshop, specialized in books for children. I did it as a student job, and I loved it so much; meeting the people, advising titles, inviting authors for a presentation, …

Johanne: I always dreamed about having my own Bed & Breakfast.

Vit: This question is such a nightmare for me. I can’t imagine myself doing anything else but making movies. At the age of 5 already I decided to become a filmmaker, when seeing the movies by Karl Zeman. Back then I thought it was all real, and the moment it was revealed to me that you can actually make and create such stories, was the biggest magic I ever experienced in my life. I can’t measure how hard it could be for people who are not allowed to make movies for political reasons, having their biggest passion taken away from them. I would probably become a teacher; I was educated to become a kindergarten teacher.

Do you remember a moment when you realized the audience was much smarter than you expected?

Johanne: You should never underestimate a children’s audience. I realized that already as a kid. It was so not funny to watch films that addressed you as an ignorant child.

Claudia: When taking your own kids to the movies, you might try to help them understand by explaining everything, until they look at you and say: “Yes, that I already understood.” Usually they can handle more than you expect.

Which topic would you like to see addressed in young audience cinema today?

Claudia: Many films were already made on the topic of climate change, but a good movie will learn you how to deal with it, it will address new generations who’s future is in danger, inspiring and supporting them.

Johanne: Different elements of childhood that should give them the confidence to understand that children can act in a meaningful and purposeful way.

Vit: I can do both in one: What a lovely ladies!

Claudia: We never met each other before, but very easily became a team. We found a way to communicate and understand each other, with probably a similar approach towards film, and sharing the same humour. Bringing us together was a great choice. In our discussions we always started from the script. What really matters is how a film touches you and gets you engaged.

Johanne: We had such interesting conversations about film; those talks were a crucial part of our getting-together.

Vit: It also helped that the selection of the movies was done so well. I can’t imagine how many movies Jaroslava and Marketa must have been watching to finally pick these 10 titles in competition. They did such an excellent job.