Yoichi Narita on FOLLOW THE LIGHT: “She can’t help but get angry.”

Endless rice fields, as far as the eye can see. They appear as geometrical shapes, criss-crossed by the straight lines of empty roads in a region where everybody seems to be moving away – to start a new life in the city. Amidst all these rigid shapes, there’s suddenly a circle: a crop circle in the rice paddies, where two lonesome classmates meet. The secret that Akira and Maki share makes them grow closer. But while bonding, will they still leave a door open to let the outside world ooze in? 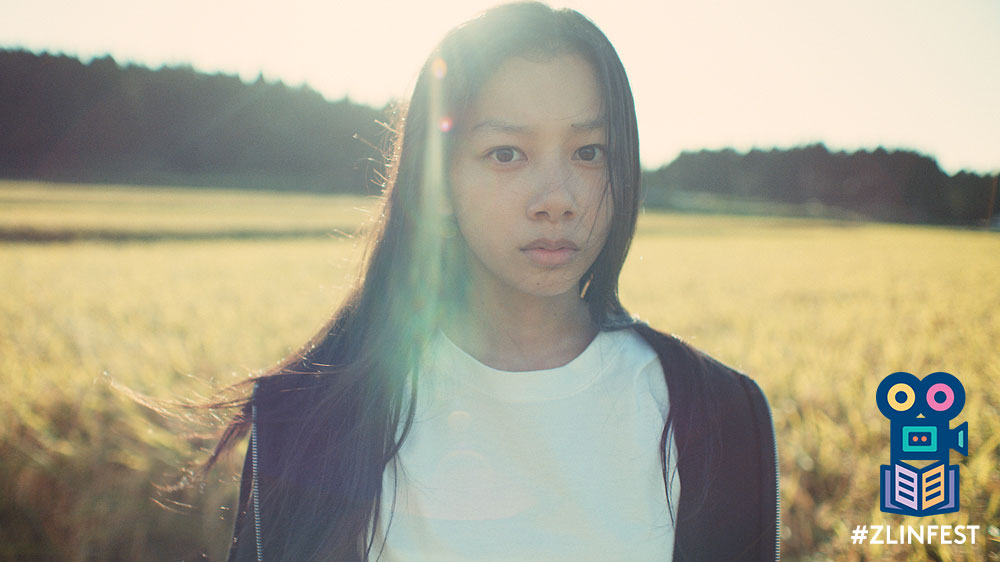 What strikes me most in FOLLOW THE LIGHT are the colours… On screen, the world looks blue, grey, white, with only few colour accents.

Yoichi Narita: For me, finding the right colour and tone are extremely important; they define the audience’s impression. This is a story about people searching for a light; I guess that explains the colour palette. However, I also cherish warm colours. Especially in the rice field scene; that is crucial for the story. When their hearts connect with each other, the field lies shining under a golden light.

All this helps to experience the film as one long dream sequence. Was this done on purpose?

There is a big generational gap between generations that seems hard to cross.

Narita: FOLLOW THE LIGHT is a depiction of adolescent years, which is the most unstable period in a person’s life, probably peaking around the age of 14. Somewhere in the process of growing from a child into an adult, teenagers might abruptly reject the entire world of adults. This is particularly the case with Akira.

The same goes for the gap between boys and girls. The camera is always on a group of boys, or a group of girls, but they never mix together.

Narita: This is exactly for the same reasons of adolescence. While being more sensitive to the other sex than they can handle, at the same time they often reject them, flocking together with groups of the same sex. Akira and Maki are obviously the exceptions. At this stage in life, not feeling as if they belonged to either one of those groups, it was inevitable that they would turn towards the other sex and that’s where they find each other.

Maki’s rage sometimes becomes overpowering. What is going on inside her?

Narita: Many things! First of all, she can’t accept the gap between the utterly happy family feelings of her childhood and the cruel reality of her current situation. Second, there is the anxiety caused by what she sees around her: a world growing emptier now that everyone seems to be leaving town. And then the third element is – again – her vulnerable age of adolescence. Securing the crop circle as a place to escape from a world in which she feels lonesome and all alone, she can’t help but get angry about the way she is being treated.

Is the escape from the countryside to the city an important issue today in Japan?

Narita: It has become less of an issue during pandemic times, for obvious reasons. However, it is still an extremely important issue for the Akita region, where the movie is set (as it is for most rural areas around the world), which has the highest rate of depopulation in Japan.

The scene about “the reality of food” is hard to watch.

Narita: It is a very important scene to me. As humans, we kill animals and eat plants, like rice. I don’t think that is necessarily a bad thing, but I wanted people to realize again that it is an aspect of human nature, even when we’re not constantly aware of it.

Often there is silence in your film; only every now and then does the sound becomes loud and intense.

Narita: Don’t we all live more by "presence" than by words? The people who are there with you are more important than the words they speak. Striving for a film that felt as ‘real’ is possible, I gave a lot of importance to all sensory elements, most particular to the sound, including volume, music, dialogues, and sound effects.