The Witch Hunters were born in Serbia

The great surprise of this year's competition was for the festival dramaturgy the Serbian-Macedonian film, with the mysterious original name Zlogonje. Despite somewhat ominous name, it's not a horror or a thriller. It tells story about superhearts. 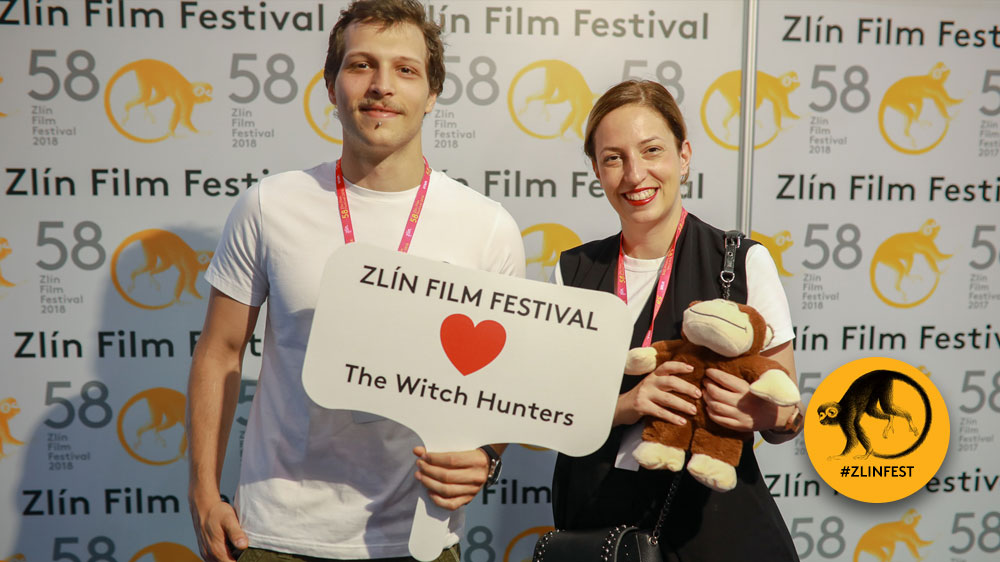 But not about those we know from Marvel adaptations. You can meet these superheroes every day at school, at a bus stop, or as opposed to a street counter. Ten-year-old Jovan suffers from childhood cerebral palsy and, because of this life limitation, runs into the fantasy world. After meeting a new classmate, wild Milica, it's time to come to light and show the world super capabilities.Today, the Czech premiere of the film Witch Hunters was hold at the festival in the presence of director Raška Miljkovic and producer Jovana Karaulicová.

Raško Miljkovič: "I always wanted to make a movie about children from divorced families."

Why did you choose a children´s film for your feature debut?To be completely honest I never really thought about it as a children’s film when we were preparing it. I just loved the story and the characters, the emotions the script carried within itself. When I read the script I just thought: “Wow, I would love to make this movie!”

Also, a very personal aspect of my motivation were my younger siblings: Masha, Arsen and Jugo, I wanted to make a movie that tackles with themes such as being different and children of divorce, since we are all children of divorced parents. I hope the movie might help them sort some things out in their minds. Divorce looks much more terrifying when you’re a kid, maybe this film will make it seem less so.

How did you manage to make a children´s film like that? Was it hard to get the finance for it? What kind of cooperation was with Macedonia?

Sometimes it was very easy, other times it was almost impossible. We always had less money than we would ideally need, but through the crews positive energy and the amazing willpower of the child actors we always managed to pull everything off!  Most of the authors are debutants like myself and the two main actors, so we were all very much into the project a hundred percent, pouring our blood, sweat and tears (sometimes literally) into the creation of the movie. We somehow made a low budget film seem like it’s not. Well, at least I think so.

It would be impossible without the coproduction with Macedonia, not only because we had a bit more financial support, but we had a bigger production team as well with them joining us and helping along the way. And let’s not forget, our “witch” is from Macedonia!Bottom line would be: It’s almost impossible to get financing for a kids film in the Balkans (or at least as much money as you would really need), but with the right crew, who becomes your second family, impossible becomes possible.

How did you find Mihajlo and Silma?

The casting process took about nine months, so it wasn’t an easy feat. We combed over all of the acting (and then non acting) schools in most of Serbia before finding this dynamic duo. There were more than 600 little girls on the casting, but once Silma entered the room, I was certain that she was our Milica. She had this raw and very sincere approach to acting and a very boyish posture which was ideal for the role.

With Mihajlo it was a bit more complicated, and a bit more luck was involved. We were already six months into the casting process, I was traveling every weekend to different towns in Serbia, meeting kids with partial cerebral palsy and chatting with them about movies and acting. One weekend I took a day off and went to my mom´s house to help her out with some gardening. And while I was in the garden, her neighbor came over and we started chatting, so I told him a bit about the movie and the casting and whatnot. Suddenly, he tells me one of his best friends has a son with partial CP, and asks me if I was willing to meet the boy. So the next week I go over to their place and there he is. A very outspoken, charismatic, charming kid, who has a soul of a thirty year old, and we hit it of immediately.

So after they were cast we started rehearsing, twice per week for about three months and then four times a week a month prior to shooting. It wasn’t a typical method. We would read some scenes, but then we would talk about certain emotions or situations and how we felt in those situations. It was a process where we all became very close, like siblings, and the two of them became inseparable.After this the shoot was a pleasure! They always wanted to do one more take, to give their best, and were really focused and driven, sometimes they had more energy than us grown-ups. It was a real pleasure working with them both, and I think they have the potential to do great things.

There is a scene, where Milica doesn´t care about any computer games. She rather starts to play with a small animal toys. Your film and Kenyan film Supa Modo (which is also in the competition) talk about children using their imagination. This topic seems to be more and more important….

I think it’s very important to nurture imagination, and try and hold on to it for as long as you can. Keep the child inside of us alive. I’m not an enemy of computer games, quite the opposite in fact, I play them myself, and I think they can be a tool for broadening ones imagination, same as movies. But when we are young, and we play with our friends, toys, twigs, dirt or sand, this is how we learn to use this imagination, how to invent new worlds, new characters or beings, and by playing we incorporate the use of imagination into our daily life. I guess that’s why playing with your friends, outside, in the woods, in the dirt Is so important, with toys, or twigs or whatever. When you play these ordinary things become something extraordinary, and if you can hold onto this skill for a longer period than childhood, then you can do really incredible things.

Main child actor Mihajlo Milavić: "My hero is my dad and granddad."

Who is your favorite superhero and why?

My favorite superhero is Batman. He’s very similar to the superhero I play in the movie, called The Shade. They are both tough and mysterious, and have super cool capes!

Who is your hero in real life?

There are two heroes in my real life. My dad and my granddad, because they always pushed me to go on and keep strong whenever life was getting hard.

How different or same is Jovan from Mihajlo?There are a lot of similarities between the two of us. We both go to a normal school and we both go to therapy exercises every day, but I think it’s much easier for me in real life than for Jovan in the movie. I don’t know, its strange, at the same time, we are very similar but also very different.

How was it to play together with Silma?

I loved working and playing with her! We became very close friends, and always got along great together during the shoot. But the most fun we had was in the breaks between the scenes! We would play the guitar with Mata our acting coach, and think of new songs about the different crew members everyday! It was a blast, almost everyday went by too quick.

Any scene difficult for you or any funny experience from the shooting?

One scene was emotionally very difficult for me, but I think in the end we did a great job. It was the scene when Jovan wants to climb the stairs in the therapy room. The funny experience was when Rasko, the director, told me one day after the shoot that he accidentally broke my phone, because I would always give it to him for safe keeping while filming. So he said we have to sit down in a café nearby for him to try and repair it. We got to the café but it was very dark, suddenly the light turned on and the whole crew was there with a HUGE birthday cake, because it was my birthday on the shoot! I was so thrilled I started to cry because I was so happy. I’ll never forget this day.