PETER BUDINSKY ABOUT JOURNEY TO YOURLAND: “Perfection in the imperfections”

The Slovak-Czech JOURNEY TO YOURLAND is a project ambitious in its storytelling and visual approach. Now the Zlin Film Festival is proud to have the animated feature premiering on its opening night. With warm congratulations to director Peter Budinsky and his team. 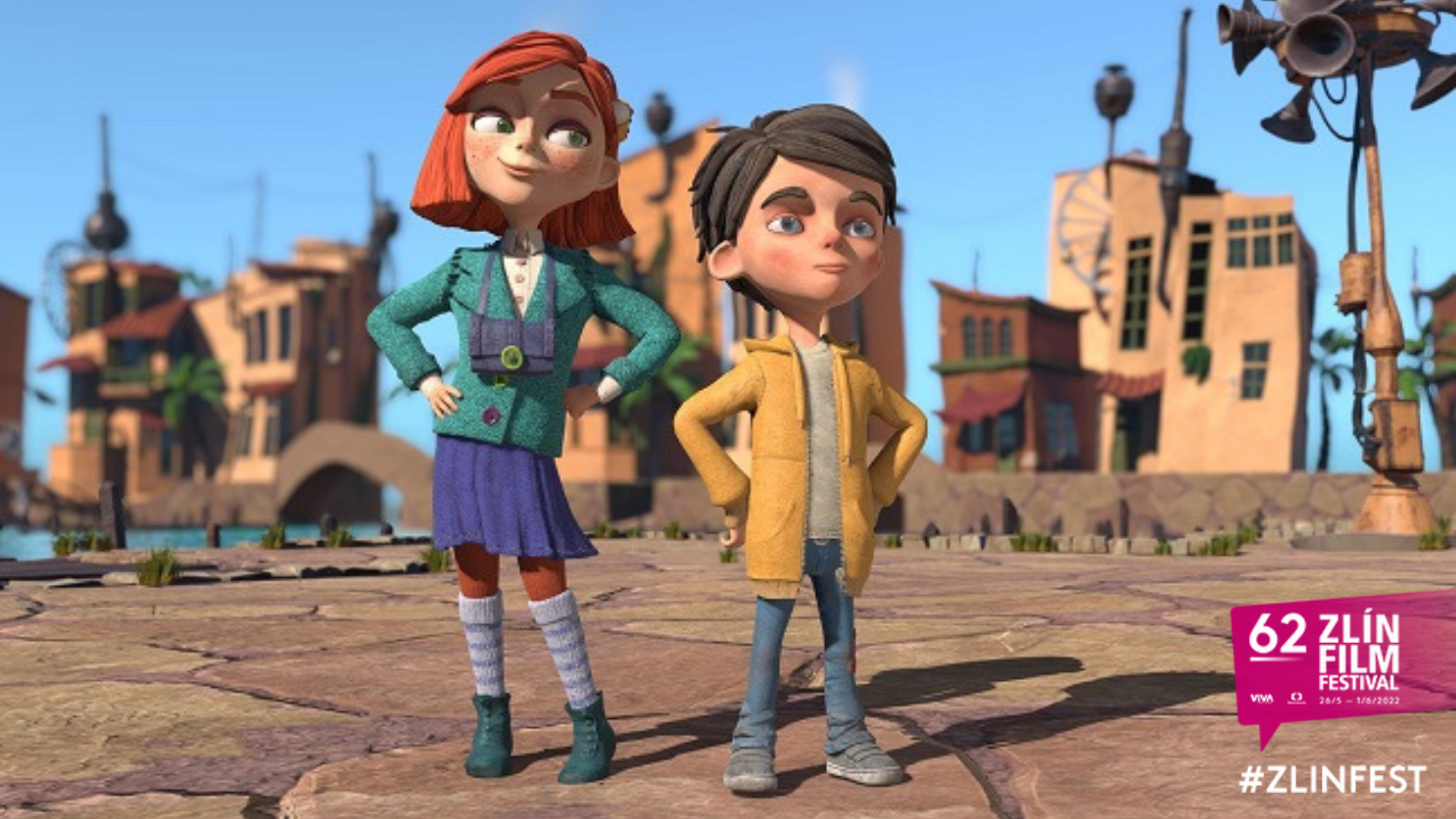 10-year-old Riki runs away from home following a mysterious emergency signal, that leads him all the way to a breath-taking parallel world called Yourland, where wonderful machines roam golden deserts, monkeys and ravens talk, and science peacefully coexists with nature. But his journey brings Riki in the eye of a hurricane: a power struggle keeps Yourland in a strong grip, threatening – even literally – Riki’s weak heart.

With its elaborate story and visual ingenuity, the film asks a lot from its audience, but it also gives a lot in return.

I am aware this is not one of those movies you can watch while vacuuming the house, and that is how I wanted it. The story teaches many topics open that aren’t easy to talk about, but the answers are all the more important. Finding the right balance was a continuous inner struggle for this movie, that is targeting a wide audience without losing its in-depth approach. We constantly overlooked the story from a distance, alternating funny and sad scenes, and colourful and gray visuals. Kids are our target audience and YOURLAND is dedicated to them. Throughout the process we were always ready to make changes, every time we understood that we were pushing things too far. For example, the design and character of the ravens was changed completely, compared to how they looked and acted in an earlier stage. They turned into grotesque, silly collaborators of the main villain.

The first 20 minutes of the film are entirely focussed on the one main character. An unusual choice.

One of the most important elements in creating this film for me was to always serve the audience something unexpected. Of course I hear those opinions all the time that a movie should open with funny, colourful scenes, but I choose a different approach, leading the audience in one direction and then suddenly make a drastic change. There were hundreds of directions possible, but this is how I like it, and how I felt it should be done. I wanted to offer mother and son enough space to show us their intimate relationship, their feelings and needs. If we would rush it too much, their magical bond will for ever remain vague.

You're not afraid to introduce us also to the unpleasant aspects of Riki’s character ("you're the worst mum in the world").

It’s important not to sugarcoat reality too much. Kids can be cruel, but even when saying unpleasant things, it is only a momentum. Deep in their hearts they do love their parents. I’m sure we all once had those moments of anger and hate towards our parents, which helps the audience to identify with Riki. Throughout all the many versions of the script, Riki was the only character that was never fundamentally changed (only a bit “polished”). Every of his lines and actions were reconsidered many times – at one point all I had to do was close my eyes to teleport myself into Riki’s head.

It feels like JOURNEY TO YOURLAND uses the cinematography of a contemporary action movie: fast cuts, close-ups, ...

Honestly, I never thought about it this way. I do enjoy long shots in live action movies, discovering about the characters without a single word being said. But in animation, I like action, movement… The scenes in which characters are just standing and talking tickle me inside; I want to have them moving all the time. The framework for the narrative is created by the close ups (showing the details that we’ve been working on in our set and puppet design) and wide shots (showing the complexity of the sets), that should be like a rollercoaster. I’m a fan of coming up slowly and then going down fast, giving the scenes an extra dynamic.

What were your most important visual sources of inspiration, whether from live action drama, animation, or the arts in general?

Inspiration for me represents my entire live experience, whether it’s a movie I saw as a child, an art gallery I visited last week, or an episode in my life. Our visual inspiration and moodboards mainly came from stop motion movies, that have such a remarkable history in Czech Republic and before in Czechoslovakia. And I follow some miniature artists on Instagram, which is a perfect source for studying the imperfections of the human touch.

I love using traditional animation techniques and then mix them with new technologies. For YOURLAND we took a stop motion puppet animation look as the starting point for every phase of the production. For example, all the characters were designed as 20 cm tall puppets, though modelled with 3D software. All buttons on jackets have strange shapes, as our puppet artist couldn’t create perfectly round shapes for such small objects. The texture of the skin looks like an upgraded type of plaster. We were looking for the imperfections in the movements and lip-sync – I always try to add a “human touch”; nothing in our lives is perfect; then why should it be in movies?

The result is a very mature type of animation.

It was my number one priority to secure a highest possible level of animation. The eyes and mimic were my top priority. Once we reached that stage of “perfection”, we started creating the imperfections. Our team in the studio designed a code which was deforming the mathematically perfect movements created by a computer, to add some distortions. We set up various values, according to which part of the character was being animated.

In the opening scenes we see these rigid city structures ("a grey block between grey blocks") that contrast strongly with the colourful world we'll soon be visiting.

These grey blocks are Petržalka, the neighbourhood in Bratislava where I grew up in an atmosphere of a concrete jungle. Those days Petržalka had a bad reputation for drugs and crime. Which was correct, but still I have plenty of important memories connected to it. I keep on telling everyone I was born there, all the time advocating for my old neighbourhood, like a small town patriot. This grey world – a foggy, godforsaken area – that Riki is moving into with his mum, reflects his mental state. On the other hand, the world of Yourland is full of colours, superb inventions, and all things Riki ever dreamed about. Due to this contrast we understand that Riki’s inner world is not dependent on the exterior world. Even though the world we are living in can seem ugly, we can carry a surprisingly full and rich inner world inside us.

Nothing as difficult and expensive as animating water... and there's plenty of water in JOURNEY TO YOURLAND!

Which gave our team members many sleepless night. You know… we were the first feature animation project using the real time tool UNITY as a basis for our creation process. This tool is not developed as filmmaking software, so we came across many difficulties in the first try-outs. But finally it came with so many benefits; it enabled us to collect a huge number of shots on the water and I even wasn’t forced once to adjust the script.

A great environmental concern speaks from your film.

Isn’t that the most important topic we should be talking about today? I regret I couldn’t give it even more space. That is why my next film will focus even more on the environmental topic. There’s simply nothing more urgent to talk about. We can have conflicts, we can have wars,… but if we no longer have a planet to live on, then we’re all doomed.

That's not the only contemporary problem you're tackling. Populism is another one.

Many topics can make my blood boil, but in terms of populism you might know that the situation in Slovakia is running out of hand. We’ve “borrowed” many quotes from politicians and public figures and I should say… we never felt like running out of supply.

There was a small quote that honestly moved me: "Fathers are the same everywhere..."

I’m addressing all parents as such; not just a particular case. It’s not poverty or divorce or any other issue that worries children most; it is the fact that parents do not really talk with them. Emma’s father is hiding his sadness for his daughter, Riki’s mother is hiding the truth about dad,…  I’d like all parents around the world to understand how important it is to be honest with your kids.

The film is a prototype of a creative co-production construction. How was that structured?

Barbora Budinska: The set-up of the co-production was based on what felt most natural for every partner. The Czech Republic has quite some experience in feature animation productions, which was shared through the studio in Prague. The Belgian co-producer runs a post-production studio; we could entrust him with that part. The structure just created itself! What was helpful to keep the team together was the fact that Peter clearly understood how this would be a different journey compared to his short films. He passed a lot of responsibilities to the team members and allowed them to be creative with new ideas. It was never about giving orders or fighting for something, but rather about looking for solutions together. I’m very grateful for that.

How much were you held back by budgetary limitations?

I tried not to think about it. Our amazing team members all did much more than they were supposed to. To any budgetary topic, there was always a creative solution. For example, I was initially told to have only a few shots with cam movements in the entire movie. Now when watching it you’ll notice most of the shots have cam movements. Maybe it’s because of my "arrogance" not to bow for limitations, but the true credit goes to the team that was working so very hard.

Soon your film will premiere at the Zlin Film Festival.

It’s amazing to have our film in competition there, and I’m really honoured. It’s like winning the price even before any prices are given! After years of work, it is such a satisfaction for me and for the project. I can’t wait to be there and enjoy the festival atmosphere together with the other guests.