We presented the visual theme of this year's festival and the planned form of its 62nd year at the Congress Center in Zlín at press conference on Wednesday. In its supporting program, the festival will join in on the celebration of the fact that it has been 700 years since the first written mention of Zlín.  It will take place from May 26 to June 1, 2022. 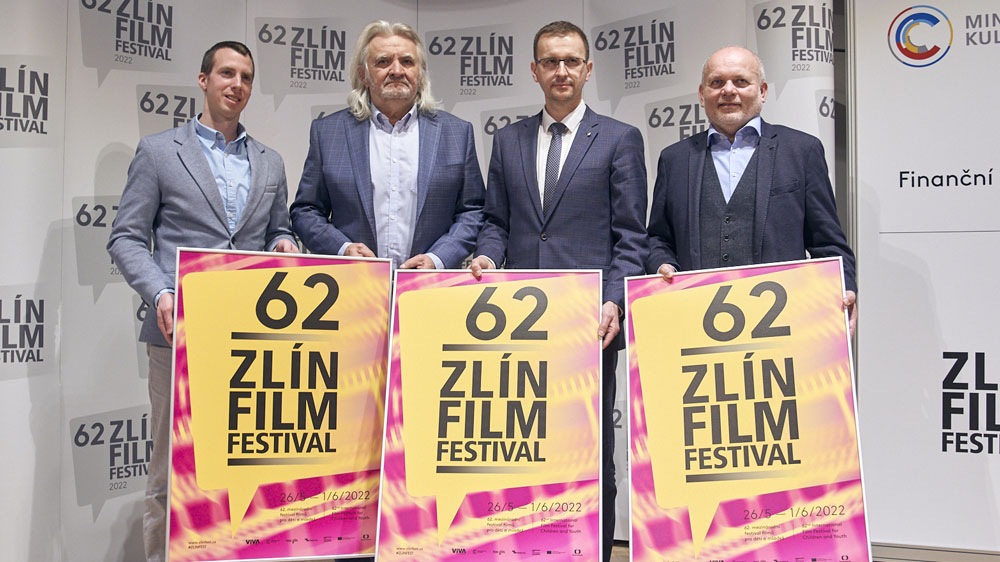 The 62nd year of the oldest and largest film festival for children and young people will not follow its traditional format for the main theme as in previous years; this year the theme is the festival itself.

"700 years since the first written mention of Zlín is an unforgettable topic for us, and since our festival is an integral part of the city's cultural life, we would like to follow up on the important anniversary in the supporting program and during it remind us of the important role of film in Zlín,“

The author of this year's visual design is again designer Zdeněk Macháček. In an effort to reach a younger generation of visitors, this year it is using elements that everyone encounters on a daily basis.

"We want to strongly appeal to personal face-to-face communication, especially in the population of 6- to 16-year-olds,"

Zdeněk Macháček from Studio 6.15 in Zlín explained and added:

"With the help of an info block, an icon or a comic book bubble, a pile of film material and the dominant new logotype of the festival, bright and cheerful colors, we want to challenge everyone: Turn off your monitors, limit e-communication on networks, and come with us to the cinema, a concert, or to experience other activities. Come with us to celebrate the 700th birthday of the city of Zlín, a city without which the festival would not be and vice versa.”

The 62nd Zlín Film Festival will present competition films in its traditional categories, to which filmmakers can submit their films until March 1. The program organizers are at the peak of the selection phase of films for the upcoming festival.

"At the moment, the film market in Berlin is still going on, which is crucial for us, because this is where we have the opportunity to see the world's latest film productions, which we will then bring to Zlín,"

After the previous two irregular years, when the 2020 festival took place in September and last year's took place in two parts, the organizers are returning to the original spring date.

"The previous two years have proven to us that the festival's proper place in the calendar is at the turn of May and June and we hope that it will remain so in the future,"

said executive director Jarmila Záhorová, adding that the pandemic brought the festival not only complications but also new opportunities in the form of online screenings. These have inspired Filmfest, s.r.o. to create a new year-round project. Through its own online distribution platform, Zlín Fest Screen has been offering schools throughout the country high-quality film productitons from all over the world, as well as teacher and student worksheets, since the beginning of February.

However, in addition to the film festival itself and the Zlín Fest Screen platform, Filmfest, s.r.o. also organizes other projects, such as the Clapperboard Salon, the MONET+ Zlín Festival Half Marathon, it manages a permanent exhibition of Zlín film under the name Cabinet of Film History at the Film Studios, organizes urban film camps, and has newly prepared a special film workshop as part of the international festivals project.

Two of these projects are a traditional and inherent part of the festival's supporting program and both belong to the festival's Sunday program. The Clapperboard Salon is celebrating a quarter century of existence this year and will start on March 9 with its exhibtion opening at the Hybernia Theatre in Prague. From Prague, it will go to Mladá Boleslav, Liberec-Vratislav, Olomouc, Brno, and Zlín, where it will culminate in a traditional auction on Sunday, May 29 at the Zlín Congress Centre. Through the FILMTALENT ZLÍN Endowment Fund, the proceeds of the auction go to talented filmmakers.

"Proof that this money is being spent meaningfully is in the success of supported films not only in the Czech Republic, but also abroad. Examples include numerous nominations for the Czech Lion award, the Czech Film Critics Awards, and participation in festivals in Cannes and Locarno,"

The 7th annual Festival MONET+ Zlín Half Marathon 2022, which is today the largest running event in the Zlín Region, will start on Sunday, May 29 at 10 a.m. from the Congress Centre.

As in previous years, in addition to traditional screenings of competition and other films, the festival will also include a rich supporting program at a number of places in Zlín, which will provide entertainment, education, and opportunities for the whole family to spend meaningful free time together.

"With the support of the festival's general partner Kovárna VIVA, which is celebrating its 30th anniversary this year, a huge concert by Jarek Nohavica will take place. Through exhibitions we will also look back into the history of film in Zlín,"