We present this year’s festival juries to you in a series of interviews, based on a collection of rather random questions. If the answers could be drawings, probably all this would have been easier, but now that it had to be words, it was all a matter of creating order in chaos. With the help of Barbora Prikaska (Czech Republic), Géza M. Toth (Hungary) and Eliza Plocieniak-Alvarez (Poland / Germany) aka the “Animation Jury”. 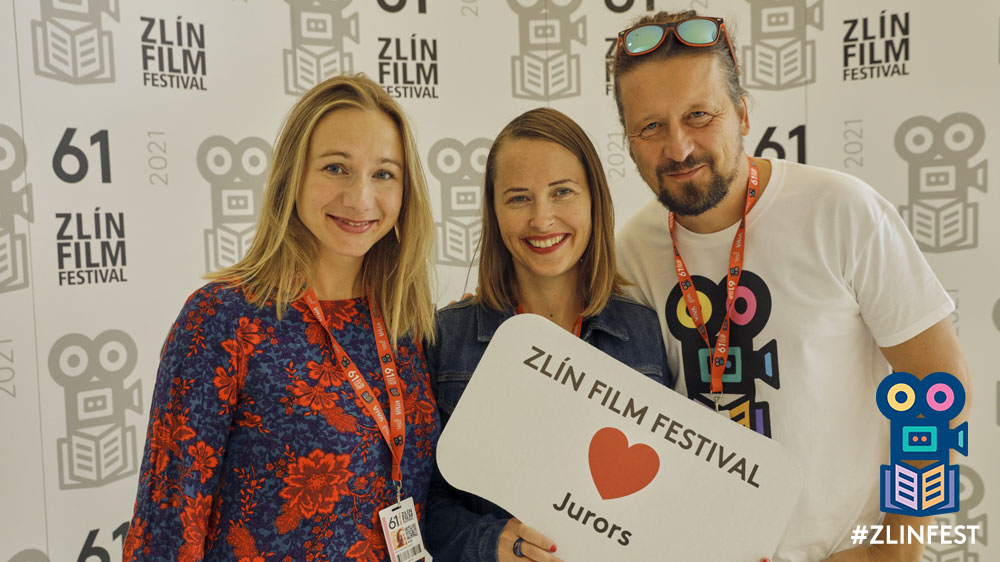 Barbora: That’s an easy one!

Géza: Maybe me. My English is the worst, so I had bigger issues expressing myself.

Barbora & Géza (staring at each with a guilty look in their eyes): Nobody! That would never happen to us; we’re very professional.

Eliza: We just saw 52 films; I can’t think about any film that I ever saw before. It seems like my entire past has been erased.

Barbora: The impressive HBO series THE WHITE LOTUS was one of the best TV series I ever saw and it brought up all kinds of feelings, including laughing and crying.

Géza: I brought all my shoes to Zlin; I have 4 pairs. With the list of different dress codes for different occasions in mind, I came well prepared.

Eliza: I brought 5 and even wanted to bring an extra pair but I couldn’t fit it into my luggage. I never packed so many pairs of shoes before.

Barbora: I’m the winner then! I brought 6 pairs, and that is literally all I have in terms of shoes. When the driver picked up my luggage, he gave me this look: “What?”

Géza: Coming here, I easily found out what a genius Bata was. Look at his house and his factory buildings and you’ll immediately understand. On the top floor of the skyscraper was a three dimensional map that showed the work of a brilliant mind.

You’re probably attending the first physical festival in a long time. What did you miss most?

Eliza: Being in the cinema, watching films on the big screen.

Barbora: Live screenings with kids in the cinema; those are the best.

Géza: Meetings colleagues. What we’re having here at this moment, that is what I missed. Discussing together and inspiring each other… that is what the entire animation industry is about.

In the films that you saw here, which animated character would you like to get to know better, and maybe ask out on a date?

Géza: The two bears from HUNGRY BEAR TALES, so that we could watch together the other episodes. And there was another Czech film (CHILDREN OF GAINMORE: HOW THEY FOUND IT) that had a very sexy kindergarten teacher with heart-shaped glasses.

Barbora: In that film there was this guy named Jarin; a kind of bad guy but in the end he sees his mistake and does what needs to be done.

Géza: That was actually the last film I saw that made me laugh out loud!

Name one director who should at least once make or have made an animated film in his life.

Eliza: Roy Anderson, who made SONGS FROM THE SECOND FLOOR.

Géza: My choice would be Alfred Hitchcock.

What animals are missing in today’s animation, the ones that were not there but should have been there?

Barbora:  The Kashmir musk deer is a very strange and rare animal that lives in the Himalayas. It looks very sweet, but has bizarre vampire fangs. You should check it out!

Eliza: There were some ants in the films here but never as true characters. I want more ants in this festival!

Barbora: There were lots of animals: one cat that scared me, and a lot of whales, and badgers – a remarkable amount of badgers!

What did the selection tell you about Czech animation today?

Barbora: I really don’t like it that when talking about Czech animation we’re always looking at the past. Here I saw some very fresh student films with a growing international appeal. I was very pleased that my colleagues liked them too.

Géza: In my opinion the Czech films were the best. They showed a deep and honest desire to tell stories for children, and to tell them well. That should always be the first and most important motivation for a filmmaker, and also for every parent and grandparent.

What sort of animal or object is the most difficult to animate?

Barbora: Géza is referring to his own film. Ever since he made a film about matchsticks, he thinks he is a genius.

Eliza: An IT programmer. Why not? Probably tomorrow I would pick something else.

Géza: I have plenty of parallel careers. I can’t imagine concentrating on one thing only. I’m working as a teacher, I direct for stage and opera, I have a studio where I create films, I do stage design, and of course I’m a famous matchstick maker.

Barbora: Something helpful – I think I could be a good social worker.

You have an unlimited budget for a short film … where would you start?

Barbora: The challenge is to find the right scriptwriter who can tell a story in an entertaining way, without pathos. Sometimes you know from the first minute: “Aha, diversity, here we go again.” Or anorexia, or disability,… You don’t want a movie to shout the topic directly and immediately in your face.

Eliza: If you want to send a message, send it elegantly. The way you make the story work is more important than the subject you choose.

Géza: I have a dream project. There is this family tale that was started by my father and passed on to me and my siblings. We all continued the story in our own families and so will the next generation do. My two daughters are working in my studio and we decided we’ll once make a film based upon these stories. I asked my father to collect them, as they were only passed on in the oral tradition and never written or recorded.

Eliza: I currently have 4 projects in development. But during the festival I zoomed out and totally forgot about my own wishes and ideas. Oh shit, that’s again such a poor answer – now they will definitely never invite me again. Which is a pity, because I really love this festival.

Barbora: Me too, I enjoy our time together. We have such good dynamics.

Géza: Unfortunately the ladies’ dynamics were mainly expressed through their fast walking pace.