We present this year’s festival juries to you in a series of interviews, based on a collection of rather random questions. There is nothing in the answers of the Int’l Expert Jury for the Junior & Youth Category that could confirm the rumours that some of them have been spotted in dubious establishments around town, not long before sunset. They  might have a rather dark approach towards cinema, but a much lighter approach towards interviews. Tian Tsering is a filmmakers who was awarded in the Zlin Film Festival a few years ago; Andrea Metcalfe and Niklas Ten have a background in sales and distribution. Andrea can join us only temporary but jury guide Suzanne is so kind to step in for her from time to time. 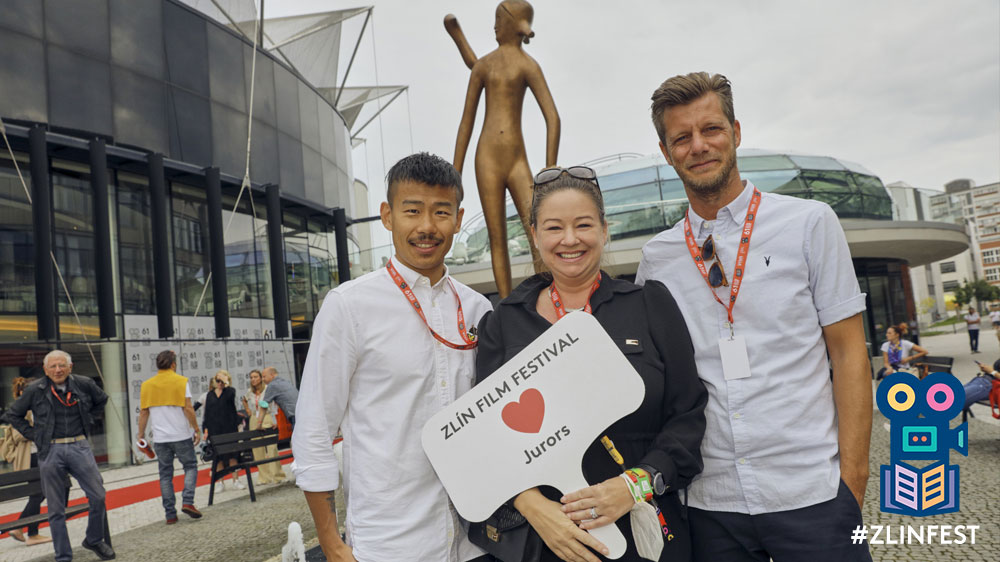 Niklas: Tian, no doubt about that.

Niklas: That was Andrea.

Niklas: Being off duty, I dozed away during the opening night. It has happened to me before. Once in a festival I saw this super slow film HELLHOLE by Bas Devos. There was this famous festival programmer falling asleep, loudly snoring. At one point in the movie, you see on screen the digits on an alarm clock, counting down over a whole minute … The entire cinema sat there giggling; we all knew what was going to happen, counting the seconds for the moment the alarm would set off.

You’re probably attending the first physical festival in a long time. What did you miss most?

Tian: Sitting in the cinema. I haven’t been going to the movies for such a long time, and this festival reminded me of all the good things about cinema.

Niklas: I have always been travelling festivals on a very tight schedule, and when the lockdown hit, at first it felt quite okay. But this being my first festival ever since, in Zlin I realized how much I’ve been missing the opportunities to meet and re-connect with directors and producers.

Andrea: I haven’t missed it. I have been on Zoom all the time; I physically saw everyone there.

Tian: We love shoes, especially Bata shoes … Well, to be honest, I don’t think we have that brand in England.

Suzanne: I can tell a lot about shoes! There is nothing like picking the right shoes. Everything else can be random, but shoes will show your personality., your style, and probably your income. I remember from my teens that was how we recognized foreigners; you could tell by the shoes. I still have an eye for that.

In earlier days this festival always used to have one country in focus. Please suggest one country (except your home country) to shine a spotlight on in future festival editions.

Tian: In this festival we have covered almost all continents, but Africa has been missing.

Niklas: For me, Africa is completely unknown territory in terms of children & youth films. It would be fantastic to have a spotlight put on it.

Niklas: Thinking in the same direction, I would love to see Michael Haneke doing a children’s film, and see how far he would take it. This is such a freaky jury we’re having here.

Suzanne: I would love to see Robert Altman making a children’s film in the tradition of THE WEDDING.

Niklas: Niklas is a very honest film professional; one of the good guys.

Tian: Tian is a talented, emerging director, with an uncompromising approach.

Andrea: I’ll do it in one word: great and great. I fell in love with them!

Tian: From the festival selection that would be ‘laughing’: DATING AMBER; ‘crying’ (a little bit): SUN CHILDREN.

Imagine you were a festival programmer with 100% carte blanche and no budgetary limitations. Which titles would you put on your personal programme?

Tian: WHERE IS THE FRIEND’S HOME by Abbas Kiarostami.

Niklas: On my list of top preferences is the Russian movie COME AND SEE by Elem Klimov, THE TURIN HORSE by Bela Tarr and THE WHITE RIBBON by Michael Haneke.

Tian (ironically): There’s going to be a lot of laughs! Children will love it.

Andrea: I would pick MILLION DOLLAR BABY, BOYS DON’T CRY – we might make it a Hilary Swank tribute – and THE GODFATHER.

Tian: A motorcycle racer. I drive a motorcycle and I’m not good at racing, but if I would have had the resources and started practising at a young age, maybe I could have been good.

Niklas: I’m not at all skilled for doing something in music. Probably being an art dealer would be a better option.

Niklas: Yes, probably that is where my real skills are. Can I change my answer to winemaker?

Which topic would you like to see addressed in young audience cinema today?

Andrea: For people trying to understand one another, and be more flexible in their minds.

Tian: What is going on around the world. This is important for kids. All the things going on in the Middle East or in Africa, where sometimes ‘being alive’ already feels like a privilege.