For all guests staying in Hotel Moskva, we wonder: do you also have this weird set of white pebble stone decoration in your room? Not everyone has them (I for instance have been deprived of that privilege) and nobody trusts them! Why would they be there? It is a recurring topic of conversation, and theories are growing wilder all the time. Is it a Feng Shui thing? Do they cover up a surveillance system, secretly taping all your hotel room activities? I am getting curious to study them from close by, but “Can I come to see the pebble stones in your room?” doesn’t exactly sound like a credible opening of a conversation. 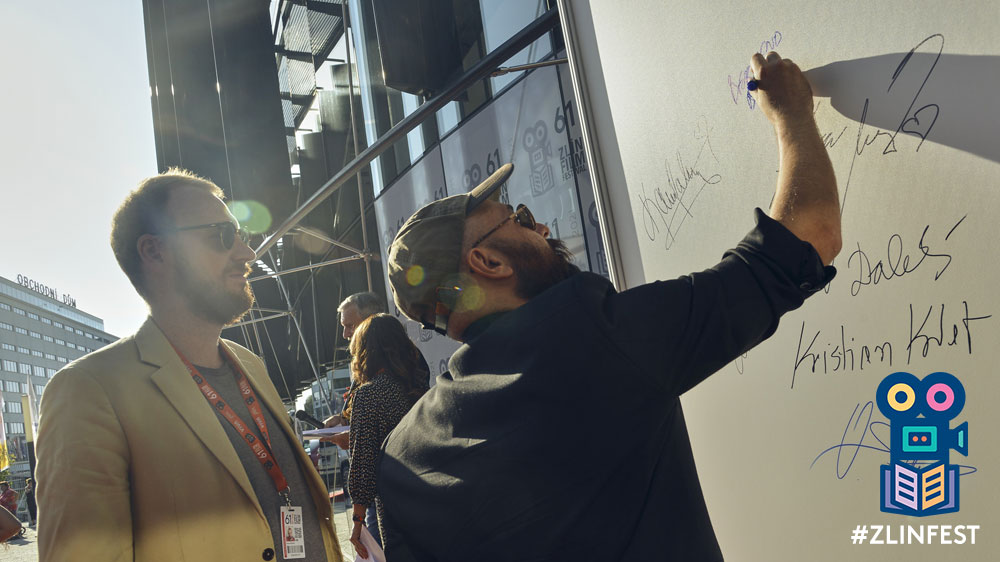 I watch DRAGON TALE in a sold out theatre. Even if the story is rather sugar-coated - Merry Christmas to everyone! - I admire the film’s effort for telling a story about a refugee girl consequently from a children’s point of view, in a live action feature with an animated creature. It’s funny how the sight of a dragon can make me miss my cats back home. (I hope they don’t read this.) Every single scene seems to be well-overthought and developed to serve the capacities of a very young (6+?) audience. Evaluating the story with our friend Pantelis, I understand that the Greek perspective on a film that ignores the political context (“If we can save this little girls, the refugee crisis will be solved”) is inherently different.

I feel a huge urge for salted peanuts, that I find in the supermarket. Back in my room, I find inside this package a little bag with extra sault. Slightly disturbed by its weird colour, I notice the imprint “do not eat”. I’ve just drizzled my peanuts with poisonous silicones. Sadly throwing them in the bin, I remember how last year one guest tried to eat the soap, when he thought he found a nicely wrapped cookie on his bed. Apparently this year it happened to more people; it will grow into a Zlin running gag … “he is new in the festival; probably he tried to eat the soap”.

One of the revelations on today’s programme seems to be A COLOURFUL DREAM, a Czech animation by Jan Balej. The best target age is still under discussion, as you might wonder how much political context is required to fully appreciate a story about totalitarian regimes. All who’ve seen it are surprised by the film’s narrative and visual qualities.

I pay a quick visit to my temporary colleagues in the communication team. You have no idea how hard these people are working behind the scenes, in a small office deep inside the intestines of the congress centrum. It is like a scene from Billy Wilder’s THE FRONT PAGE: people running up and down from coffee machine to copy machine, photographers queuing at the door, crumbles on the table from a lunch that was never finished. I would almost expect the sound of fax machines and telexes in the background. I’m grateful for having Eliška and the others always at my assistance.

Festival guests are leaving for a posh evening party (to which I haven’t been invited and didn’t bring appropriate clothing). One thing makes me happy: flowers are in! As an aficionado of flowery designs, I drool over today’s gala dresses with floral patterns or autumn leaves on it, heading for – as I’ve been told – an evening with free whisky and liquor. Other guests just returned from a concert with the Philharmonic Orchestra, performing film scores of Ondřej Soukup, composer for many Czech films. They have goose bumps on their arms, and that is not from the cold!

The interview with Marta Martinsone and main actress Asnāte Rožkalne is a bit like their film LAME-OS: wild, chaotic and totally zany. It is going to be such fun to listen to this recording again, but it will be hell to transcribe it, with a local big band enthusiastically blowing their horns at the square right behind us. I complement Asnāte … this Latvian teenager must be the first person who ever used the word ‘immaculate’ when answering my questions.

I have no idea why people always want to know how to say ‘cheers’ in another language. It is a recurring question in every pub conversation. After travelling the festival world for so long, I can now say cheers in probably 15 different languages, but so far it never added to any interesting conversation. Na zdraví!

Wandering around at an evening get-together slowly going out of bounds, I pick up snippets of intriguing conversations. “London is the new Manhattan, and Zlin is the new Brixton,” somebody states. “Size is always a matter of perspective” is a proof of true animators’ wisdom. When daylight sets in, I realize I have my first interview in only a few hours. And what is even more alarming; I see a few people that I’m supposed to interview hanging at the bar, and I don’t think they’re sober. Later I hear that they convinced a local guy with a passion for magic to get his gear down from his room and perform a little magic show at four in the morning. Just an ordinary day at the Zlin Film Festival.