Interview BANGLA SURF GIRLS: “If it tastes like sand, you have to clean it”

In Cox’s Bazar, at the Bangladesh coast, a young girl is riding the waves on her surfboard, all confidence and grace. “All my dreams are about surfing”, says Shobe. But those dreams might be different from the future that is awaiting her and her friends. The local community has very different expectations, and only one surf club accepts girls among its members. Now that the girls are growing up, sooner or later choices need to be made, and conflicts will be unavoidable. Canadian documentary filmmaker Elizabeth D Costa captures this gang of young surfettes at a crucial moment in their lives. BANGLA SURF GIRLS is a coming-of-age story like you might never have seen before. 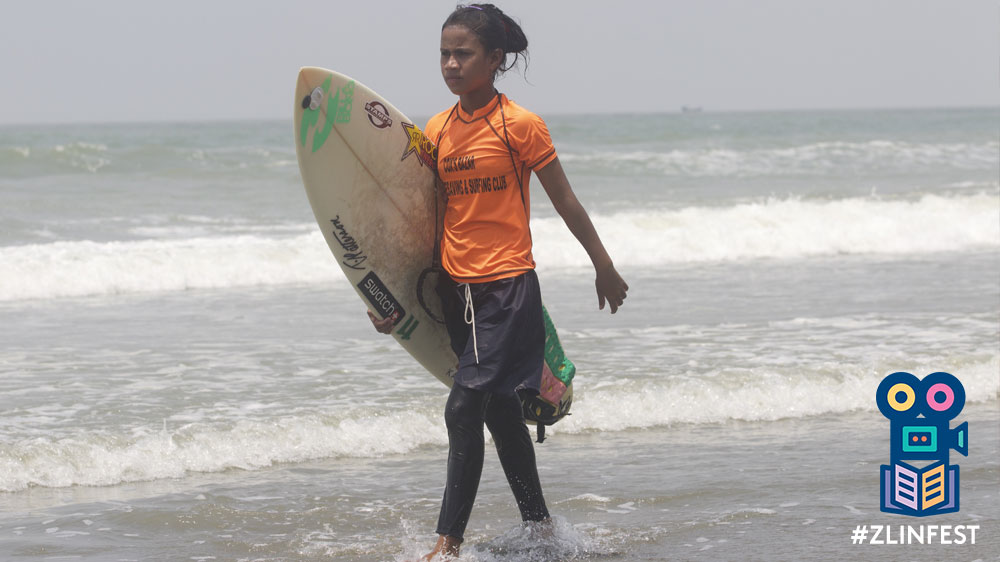 What does surfing mean to Shobe and her friends?

Elizabeth D Costa: These are marginalized girls trying to break with traditional women's roles of being at home, taking care of the family. They have dreams! Surfing gives them the freedom to choose their dream; it is the vehicle that makes them move forward as equal human beings in a conventional society.

Is the Bangladesh coastline a surfer’s paradise?

Costa: Cox's Bazar is one of the growing tourist places in Bangladesh. This is the world's longest sand beach; there is huge potential for this area. Surfing itself is a new concept in Bangladesh. The waves in Cox's Bazar are perfect for beginners; this is a safe haven to strengthen the basics, slowly build up your skills and learn all the tricks. In LA some families send their kids at an early age to learn surfing. More and more locals are showing an interest in surfing; the subculture is growing.

How did you come across these girls?

Costa: These are memories filled with emotions. I went to visit Cox's Bazar and saw little girls selling jewellery or hard-boiled eggs to tourists at the beachside. I was kind of sad to see these girls as young as 12 or 13 working so hard to make money. Then I met the same girls at the beach, walking with surfboards. That is where my curiosity kicked in. I found out about Rashed giving them surfing lessons; I connected with him and we talked about making a documentary. I had the chance to visit these girls at home, and they welcomed me with open hearts. When I saw the contrast between these same girls in their houses and at the beachside, I knew this was a story that needed to be told. The international news reports that were made about them lacked the in-depth stories of their daily lives. I spoke to Canadian producer Lalita Krishna and that is how BANGLA SURF GIRLS was conceived.

Water and salt don’t seem like a perfect match for a film crew. How did your camera survive?

Costa: Who said it survived? I had to give up on my first ever camera, one GoPro, and a tripod! This film is standing on lots of sacrifices. Water and sea salt were my enemies at one point, and then there was the sand. Every day after filming at the beach I had to spend approx. 3 hours cleaning every piece of equipment. My previous camera assistant taught me that after you think you have cleaned your devices, you should use the tip of your tongue, and if it still tastes like sand, you have to clean it once more. During one rainy season, salt got into my main camera and ruined the entire motherboard. One GoPro was washed away while Ayesha was surfing. She felt guilty but I made sure to tell her it wasn't her fault. And the tripod had crazy sand in it which ruined the whole stabilization. For the first two phases, I worked with a DoP and a sound recordist, but all of us felt that whenever they were around, the candid raw moments and true observational feelings were getting interrupted, so I decided to take the camera myself. That's when I could see the beauty. Their houses had no constant electricity nor enough space, so acting as a one-person-crew was the perfect arrangement to get the intimate shots.

The girls sound super convincing. How did you get them this far?

Costa: It was a matter of trust, as well as these girls being super talkative anyway. Shobe was always being Shobe, confident about herself, even with the camera pointing at her. These girls did not have any icon or idol to look up to in their families. It was their choice to tell their stories to the world. I guided them a little by saying that this film will be seen by many people so it would be better not to sugar-coat anything. That's exactly what they did, being totally authentic.

Their situation is not only defined by poverty, but also by social structures, including the role of the parents, relations between fathers and daughters, the judgement of the community, etc.

Costa: You can see in the film all these different sides of the community. These are females trying to break with regular norms in a male-dominated society. The parents and community go along with the programme as long as it brings in money. Poverty is the defining factor.

What about their mothers? Might they somehow support their daughters, and secretly be proud about them?

Costa: Mothers can always understand their children's needs, we all know that. It is not easy for a mother in this country to show her support in a big way. Of course, they are secretly supporting them; their silence says everything. They can feel their daughters gaining freedom and independence through surfing which, in a way, are the opportunities that they have missed.

How difficult was it for you to stick to your neutral position? Can you imagine that at a certain moment you would have actively intervened in the lives of your characters?

Costa: This was indeed super difficult, as I am also acting as their big sister. We discussed in our Chicken & Egg pictures lab about a director's role in certain situations. Finding balance wasn’t easy, but those are the challenges I love, because they make me come up with creative solutions. I always tried to show them two options, and the consequences of those choices. Ultimately, they made their own decisions. I wanted good for them, but at the same time I wanted the world to see their authentic stories.

What about the audience? People watching this film might feel the urge to give a sign of support.

Costa: We certainly want to do something tangible with our film. The Surf Club is dependent on sporadic funding from the US. That is not sustainable. Lalita and I have partnered with a local NGO; Jaago Foundation is a registered charity. Through them, we have set up an endowment programme that will ensure that our girls can continue to surf, teach swimming and surfing to younger girls, and continue their education. We hope people will go to www.banglasurfgirls.com to learn more about this programme and make their contributions to ensure the security of generations of young girls in Cox's Bazar.

We see how a new generation of girls is ready to take over. Is it possible that change might come?

Costa: Change takes time, and comes with frustrations, with ups and downs. Shobe and Ayesha are role models, they can change lives for future generations of girls who have been seeing the world through their eyes and that deserve our support. The film demonstrates how small interventions can bring about a huge change.

Costa: To me, this is a 'Don't give up' moment. There is both victory and defeat, but these girls won't give up.