Friday 10 September: All you need to know about throwing cowshit

I never mention covid in my writings – the topic is too obvious. But in festival conversations the word is everywhere. You might wonder what we’ll be talking about once all this will be over. Every day adds new elements to the discussion. Like, in German festivals it is impossible to ask your guests for a vaccination certificate; it belongs to people’s medical privacy. Not in Zlin: “We tell them, these are our rules, and if you can’t accept them, then don’t come.” All covid-safe guests get to wear a bracelet. There were times that in conversations you checked whether the other person was wearing a wedding ring or not; nowadays we check whether he or she is wearing a bracelet. Talking about wedding rings … did you notice that one of the most splendid members of the festival team is now wearing one, since a week or two? Congratulations, Princess Lucie! 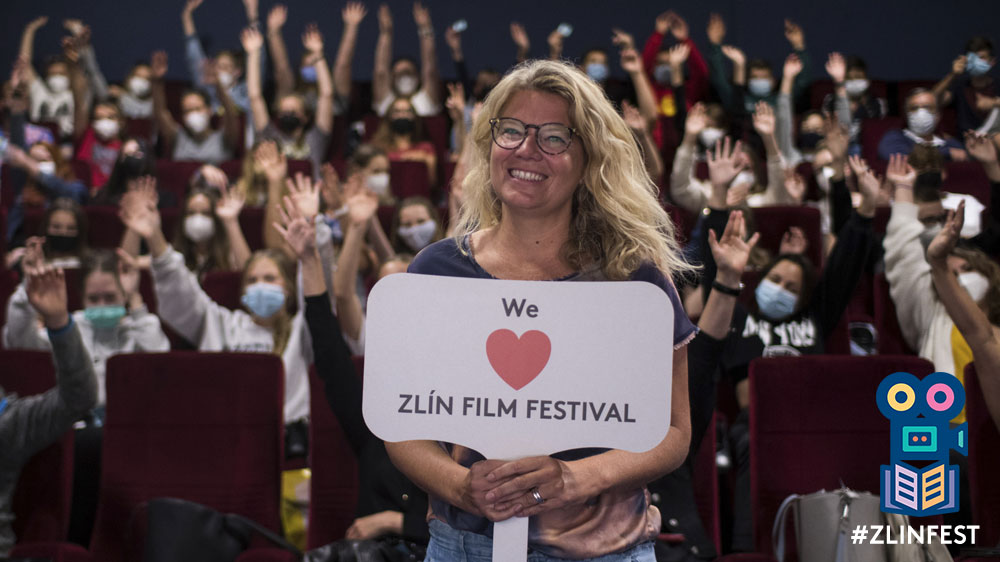 There was an particular covid story from a Czech producer, who told me how the vaccination centre in Prague is guarded by handsome looking soldiers, and how her friends would go there time after time again for another vaccination round, only so to lay eyes on those sexy guys in uniforms. Needless to say that producer herself never showed a sign of interest in the matter!

This morning SUN CHILDREN is on the programme. It recalls memories to one of this year’s most challenging interview sessions. I’m not easily impressed but interviewing Majid Majidi, godfather of Iranian children’s film, is really something. Our session came with obstacles and when we finally met online, the translator seemed not prepared for my confusing questions. “Mr. Majidi, the little boy is involved in so many affairs. He is like a juggler who has to keep too many balls up in the air." The translator stares at me for 10 long seconds, confused: "No sir, no juggler in this film. Maybe you saw other film?" Me again: "No, I mean symbolically, not a real juggler." Again a long silence, reading panic in his eyes: "No sir, no juggler!" And that was only the first of my 10 questions. It’s an amazing film though, made with visual grace, a bedazzling colour palette and impressive performances by a bunch of street kids. I’m grateful to our dear friend Amir who made the interview happen.

I’m watching NIGHT FOREST, sitting on the very last vacant seat in a sold out theatre - almost all cinemas are this morning! The film stands the school-crowd-test (though I hear them getting nervous over the spooky nightly scenes), and afterwards I’m doing an interview with Katrin Milhahn. She came to Zlin alone; her co-director (and husband) André Hörmann is currently in Greenland for workshops on indigenous cinema. Which of both destinations would you prefer? The main question about the film had already been brought up in the Q&A: “Was it real cowshit they were throwing at each other?” Apparently it wasn’t, but we feel privileged to get revealed the secret recipe for perfectly fake cowshit. Spoiler alert: cacao is one of the ingredients!

Katrin is only one of the many German directors attending the festival. At breakfast I had to reveal my identity to Barbara Kronenberg (MISSION ULJA FUNK), whom I had been stalking for weeks with interview questions: “Yes, I’m sorry, that was me…” There is the team of CABINETS OF WONDER, a colourful documentary made by colourful people, with whom it was very nice to spend time ‘in the flesh’. At a certain moment later tonight on a café terrace, I’ll realize I’m the only non-German person at the table.

Now that we are meeting people again at festivals, I suddenly remember how enriching it was to discuss films together. And there is the extra benefit for me that someone can explain me in the end “who did it”. When at home ending up coincidently watching one of those crime series that my partner adores, I usually ask afterwards who actually was the murderer. I'm always happy when the butler did it; at least that concept I can understand. After A BRIXTON TALE, the question “who did what to whom, why and with which consequences?” keeps us busy for a while. The filmmakers find it rather alarming how everyone congratulates them on their Q&A. “You all thought the Q&A was better than the film?” No, but the tone was very entertaining. What stuck with me was a revealing piece of information: the gaps in the story equal the gaps in the budget. Considered the amount of gaps in the budget, I should say this was still a pretty coherent story! When coming out of the cinema people are dancing on the main square to the music of a DJ. This festival never sleeps!

In between screenings today, our office in Belgium asked me for a quick task: to choose and briefly introduce a film that marked my career. I pick MIRAKEL (2000, Denmark), a kitsch musical by Natasha Arthy. That was the first time I claimed with Felix my participation in his acquisition policy. I totally believed in this film and was determined to work with it. Felix granted my wish and commercially it became … a disaster, although it gained a certain cult status in the world of children’s film. I have never seen that film again, but I’d love to watch again my favourite scene with the cynical math teacher singing and swinging his hips in a Hawaiian shirt, shaking the maracas.