Linda Hambäck on THE APE STAR: “Cheaper for the poor, expensive for the rich”

Jonna, a well-behaved orphan girl, dreams of finding a mother. That wish might come true when one day a gorilla comes knocking, asking to adopt her. The situation doesn’t seem ideal at first, but ultimately the two have great times together. The odd couple naturally arouses suspicion among the decent citizens of town, but Jonna and Gorilla gracefully challenge their prejudices, in a moving Swedish animated film by Linda Hambäck. Although Jonna is brave enough to drive a car, the story begins… with a bicycle! 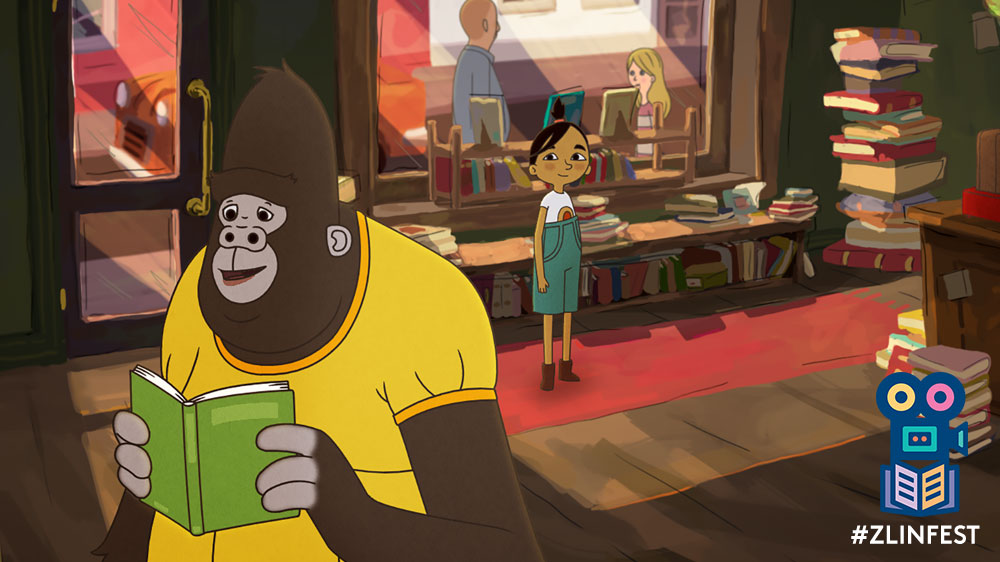 Do you remember what it was like learning to ride a bicycle?

Linda Hambäck: Yes, I had a red bike and my dad kept on running after me. I didn’t know how to turn or how to stop; I just had to yell for him once the road was coming to an end. Finally, I learned how to do it, to my parents’ happiness and relief.

Over the course of the film, the quiet and modest Jonna turns into a girl who knows what she’s fighting for.

Hambäck: For me, Jonna always was an observer, with remarkable integrity. Due to her good upbringing at the orphanage, she has her feet firmly on the ground. Then she begins to wonder about what it would be like to have a real mom or dad. This fuels her curiosity for the world outside the orphanage.

There is quite a bit going on about real estate in the film! Do you have a personal feud with real estate agents?

Hambäck: No, but I do have a strong political interest and it is crucial for our society not to be determined by capitalism. Like the interesting vision on “fair trade” introduced at Gorilla’s flea market: “cheaper for the poor, expensive for the rich!”

Having a monkey as a mother... in your story it is not the obvious choice, but it's plausible anyway.

Hambäck: For Frida Nilsson, the author of the original book, Gorilla was the personification of her father. He is a special person; her ‘personal Gorilla’. As for me, I have always liked working with animals, and using animation it’s fairly easy to blend and integrate them into my world. For me, not everything needs an explanation; that is the magic of animation.

How did you give shape to a character as plump as a gorilla?

Hambäck: Our character designer Maria Nilsson Thore is the author and illustrator of several superb children’s books; I just loved the way she portrayed bodies in her early works. Then Elinor Bergman further elaborated all the characters in a way they could be animated. We paid a lot of attention to facial expressions. For instance, when taking a closer look at Gorilla, you’ll notice her eyes are not the same size, just to make her more characteristic. I don’t like perfection; I love a design with a twist.

The animation style has drastically changed compared to your previous film GORDON & PADDY. How do you decide what design a story needs?

Hambäck: To be honest… this time we had a bigger budget, so we could expand our universe. I did a lot of research with art directors Ola Larsson and Morten Lund Thulstrup, circling around for months and then closing in, until we had really defined our universe. It took me and Ola six months of research before we had anything to put on the table. I kept Edward Hopper in mind as a reference – even though you probably wouldn’t notice it in the final result. I always keep some works of art in mind for inspiration, to make my film move in a certain direction.

You picture the orphanage as a place of dedication, which is probably closer to the truth than the horrifying image we often find in traditional literature.

Hambäck: Our orphanage is not a horrible place to grow up and, honestly, I’m fed up with that traditional image, maybe because I, myself, was adopted. Even though I wasn’t brought up in an orphanage, I still presume there are many great institutions in this world doing a wonderful job. This is the story of a girl longing for a mother but finding a gorilla instead. When Jonna signs her letter with “Jonna, daughter of Gorilla”, that is our tribute to the motherly love that we embrace.

The story contains more than one reference to Charles Dickens. Is that inevitable in a film about orphans?

Hambäck: I suppose so. All great stories leave a mark on us. We carry them with us and sow little pieces of inspiration in the new stories we construct.

The music in THE APE STAR is modest and subtle.

Hambäck: Music is one of the key elements in the creation of my films. It took me so long to find the right composers; I tried and listened to so many of them, but more and more I felt lost. Until one day, in the south of Sweden where I have my summerhouse, I went to a jazz concert. Listening to Minna Weurlander and Tania Naranjo, I knew right away this duo would be perfect for the film. We worked closely together for over a year and they were pure magic. I simply love their score!