The first part of the 61st Zlín Film Festival has finished

The Zlín Film Festival has its first part – the spring part – behind it. For the first time ever, the organizers used an online platform and a specially built studio for live broadcasting. In addition to last year's award-winning films, it offered discussions, film workshops, animated films, virtual tours, and other interesting programs. It also included the announcement of the TA CR Award and the ECFA European awards for children's films. Thanks to the project "Check the Czechs", children in seven countries were able to watch select films. 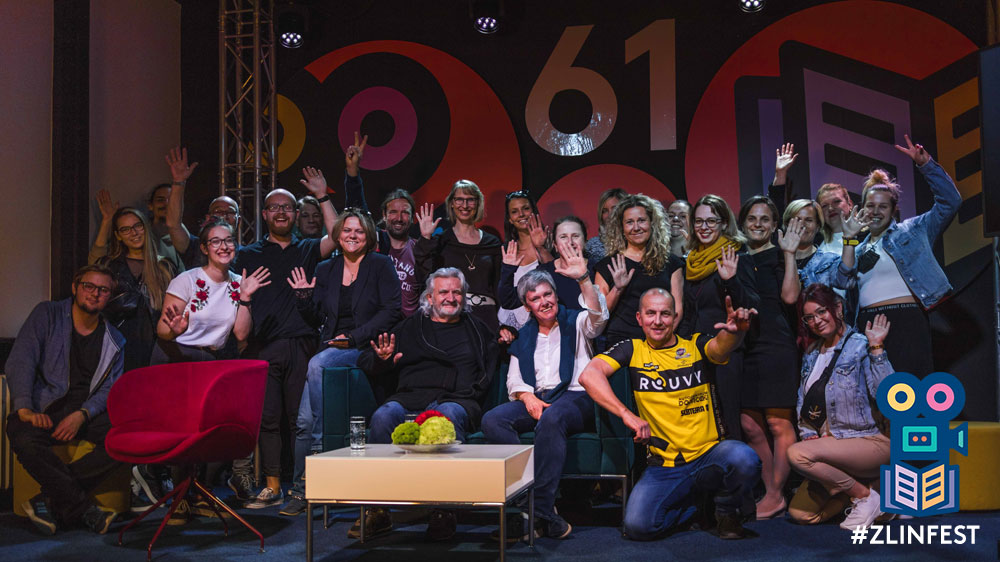 From May 28 to June 1, fans of quality world cinema were again satisfied. During the Zlín Film Festival's traditional term, however, its organizers chose a non-traditional form for epidemiological reasons, and the festival took place almost entirely online. Film-lovers from all over the Czech Republic were given the opportunity to watch the films in the programme.

"Their interest exceeded our expectations. Altogether, on-line visitors spent nearly 120,000 minutes on our films and broadcasts, which is the equivalent of over 82 days,"

said Jarmila Záhorová, Executive Director of the ZFF. There was also interest in a programme for schools, which was attended by 40 schools, two thirds of which were from outside Zlín.

The history and present state of film in Zlín was recalled during the all-day stream on the opening day of the festival. The produced talk show "Zlín Film Lives: We've Been Making Film for 85 Years!" proved that Zlín is a film city again.

"Films are really being made In Zlín again. It can be said that we are very well on our way and that people in the industry are cooperating with one another,"

highlighted the artistic director of the festival Markéta Pášmová.

"Our region is capable of creating opportunities and conditions for filmmakers. In addition, Zlín schools educate students who are able and willing to take part in filmmaking. We feel that Zlín has indeed returned to the film industry map."

The recording of this and other public programs from the festival studio remain available in the archives of the festival television.

The show was broadcast from the studio, which the festival's organizing staff built on its own. The entire online festival was then shown on its own platform, which was created for this purpose.

"We also cooperated with students of the Audiovisual Studio of Tomas Bata University and we greatly appreciate their professional approach and commitment,"

Despite the fact that the festival was online, a number of important guests visited Zlín during the festival. Whether it was Petr Tichý, director of Barrandov Studio, which is celebrating its 90th anniversary this year, director of the National Museum Michal Lukeš, chairman of the Technology Agency of the Czech Republic Petr Kovalinka, participants in lively discussions such as comic book reviewer Ondřej Král and representatives of Potterfan fans, directors, producers, and other film experts.

An essential part of the festival is the award ceremony. Two were announced in Zlín during the spring part of the festival. The TA ČR Film Award is jointly awarded by the Technology Agency of the Czech Republic and the Zlín Film Festival. This year, the National Museum decided to give out an award for popularizing science among young people. The ECFA Awards for the best European children's films were also announced. The awarded films were the Lithuanian short film Matilda and the Spare Head, the French documentary Tomorrow is Ours, and the feature film Marona, which was created in French-Romanian-Belgian co-production.

In addition to children in the Czech Republic, tens of thousands of children in the world, including disadvantaged children in India, had the opportunity to watch the festival's animated series of films that went by the title "Check the Czechs".

"Thanks to their cooperation with friendly foreign film festivals and Czech centers in these countries, they were able to get acquainted with Czech animated work in Japan, South Korea, Mexico, Turkey, Cuba, and Ukraine. We are quite pleased by this; it is an unprecedented project and a great representation of Czech cinema,"

said Čestmír Vančura, adding that at the time of the end of the festival in the Czech Republic, the foreign audience of the festival's animated zone exceeded fifty thousand children.

"I just saw the animated films from the Zlín festival. They are really good and creative. I like them very much,"

confirms Rishit Goel, 9, from his school Shemrock in Mohali, India in a video he sent.

Part of the festival took place live in Zlín. After last year's success, the organizers prepared a drive-in cinema as part of the festival. This offered three film screenings that were sold out to the last parking space. The Zlaté Jablko shopping center hosted an exhibition of art work by visually impaired children and youth from the International Art Competition Joy of Creation, as well as the exhibition of the 24th Clapperboard Salon. This kicked off the Clapperboard Tour in Zlín, an exhibition that could be viewed by visitors in Olomouc, Mladá Boleslav and Brno. Afterwards, the clapperboards will return to Zlín, where their auction will take place as part of the autumn part of the festival.

The second part of the 61st Zlín Film Festival will take place September 9-15 in its usual format, i.e. with traditional screenings of competition and other films and a supporting program corresponding to the main theme of this year's festival, which is "Literature in Film".