There is one jury in this festival in which so much expertise is gathered, that they could easily be described as “the jury from another dimension”. Awards have been decided by now, so Jiri Konecny, Louise Højgaard Johansen, Judit Bardos, Alexandre Dupont-Geisselmann and Felix Vanginderhuysen presume I might be fishing for the results. But I am mainly after a totally different type of information. They have the longest names of all festival juries and the longest CV’s attached to it – Ladies and gentlemen, we proudly present you “The International Jury”. 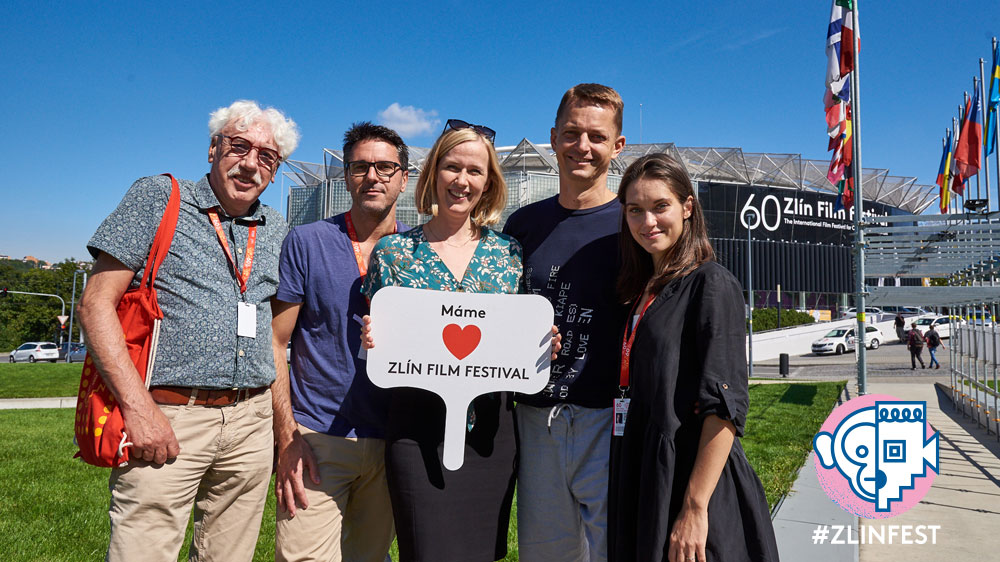 Let’s check how well you got to know each other during the festival. Who has been drinking the most?

Felix: That must be Alexandre, always having large beers. Jiri maybe could be a contender, he sometimes disappeared for hours, pretending to be “at work”, but who knows …

Judit: As a president, Jiri led all the discussions.

Alexandre: We often forced Felix to talk from his expert perspective after almost 100 years in children’s film.

Who fell asleep most often during screenings?

Judit: Me, only once, for a brief moment. And once I saw Felix …

Felix: Impossible! Not me …

Louise: Me too, just for a moment.

Jiri: I saw it happening to people in other juries but not in ours!

Who comes from another dimension?

Louise: Judit, and you can take that as a compliment.

Jiri: I suspect Judit to be R2-D2, she speaks at least five languages, probably even more. In our jury “coming from another dimension” is one of the greatest compliments a person could get.

If you as a festival organiser could steal one thing from this festival and take it home with you, what would it be?

Louise: The synergy between city and festival, the way the whole town comes to live. I love local festivals, and even though this is a very international event, still you can get a sense of the local flavour and meet the audiences in person. That is a dream!

Jiri: The festival’s tradition and how the city’s tradition adds to that. Zlin has basically been a “film city” since forever.

Judit: I love the park being full of children and families. You don’t get to see that in Karlovy Vary.

For most of you it is the first physical festival to attend in a long time. How much did you miss it?

Felix: For me the decision of the Zlin Festival was crucial. Over the last months I had to cancel 6 festival trips and I kept my fingers crossed all summer for Zlin not to be cancelled too. Hanging out with our jury for me was so enlightening, combining thorough film discussions with less serious conversations afterwards at the bar.

Louise: The work of a festival programmer can be pretty lonesome. I’m working from my home in Prague, from my kitchen, and it is really amazing to finally get away from that dishwasher and see my colleagues and friends again. Hopefully this will mark the start for many more travels this year. But we festival people don’t know yet what will happen. We all have a strong Plan A, but we need to keep Plan B in our minds.

Alexandre: It is important to get started again. The reluctance to re-open cinemas after the lockdown might have planted a seed in the minds of people that something is very wrong with cinemas. Now festivals could be a motivation for the audience to go to the movies again.

Jiri: What I missed the most is that actors and directors couldn’t be here with us. What a pity. From this year’s competition, some of them could have brought a wonderful energy to the festival.

Any more impressions to share on the city of Zlin?

Jiri: I’ve been studying the architecture and urbanisation of this city and I’m a big fan, this is one successful example of how a city can be organized. Except this highway crossing right through the town centre, which is a problem to be solved.

Judit: I adore the rooftop of the Bata building.

Jiri: Of course, you felt connected to your other dimension! It looks like a UFO gateway.

You have been watching two competitions, one for children and one for teenagers. What did these selections tell you about young audience films today?

Felix: It seems much more difficult nowadays to find high standard quality films for children than for teenagers. In our discussion about the youth section we had at least 4 candidates to receive an award. In the children’s section much more often we said “yes, but …”.

Alexandre: I can’t accept this idea. In the kids competition films were included from around the globe and we should realise that our European perspective is not the only doorway to the world. Maybe for kids, more than for teenagers, it is important to stay close to their daily reality. Many of these titles from China, Brazil, Chile, South-Korea, etc. might have a huge relevance for the domestic target audience, and that is a perspective that sometimes we might be missing.

Jiri: For me the question how to judge these films as an adult was surely legitimate. I would love to hear more opinions from kids and learn from what they actually appreciate. Teenage films in general are standing closer to our adult reference framework.

Louise: In general children and youth films are often subject-driven, elaborating on one specific theme. The nice thing in this selection is that on top of that many films also came with an amazing artistic vision.

Judit: I had the feeling from these films that many children and teenagers today are all alone, without families, and they don’t have the words to express their problems. It is up to my generation and the next ones to do something about that.

Let’s check some more details about the films in your competition. What was your favourite animal in this week’s selection?

Louise: There were very few animals. I was missing the cats.

Alexandre: We had ongoing discussions about the dog in MONICA AND FRIENDS – was it actually green or blue?

Felix: We had a horse in SUNBURNED and a pony in H IS FOR HAPPINESS.

Jiri: My favourite was the tiny frog in ROCKS.

Which mature character would you like to get to know better, or maybe ask out on a date?

Louise: Without even considering that would be Marlon from INTO THE BEAT!

Jiri: The grandmother in LIFE WITHOUT SARA AMAT was a very nice and interesting lady, I wouldn’t mind having a chat with her. But Sabine Timoteo, playing the mother in SUNBURNED, used to be one of my ultimate idols, so that is my obvious choice.

Felix: The mother in SUMMER WHITE would be more suitable for my age. She could teach me how to dance, and tell me how “it is all in the eyes”.

Alexandre: And she was smoking all the time – good for you!

Judit: I would love to meet both the boy and girl from LIFE WITHOUT SARA AMAT, maybe together with the director.

Zlin always had the tradition of putting one country in focus, which couldn’t be done this year. Please suggest one country (except your home country) for a future edition.

Louise: I enjoyed watching the South and Latin-American films as they have a special flavour and a great energy. Being brought up on Northern-European cinema, this felt really refreshing.

Jiri: I would go for Great-Britain. There is a lot for us to learn from them.

Alexandre: The two Asian films in competition (from South-Korea and China) made me think about diving a bit deeper into that continent. Learning about their film history, we might get a better understanding of the films they are making today.

Felix: Italy! I’m sure that for a youth section many films have been made there that we haven’t seen yet.

Judit: Finland, Sweden, Norway …. I want to see more from that part of the world.

Pick one director that you think should once make (or have made) a children’s film.

Jiri: Ridley Scott would surely be able to make an utterly thrilling and accessible quality film for children.

Alexandre: Stanley Kubrick, as the Moskva Hotel reminds me all the time of THE SHINING.

Judit: I go for Quentin Tarantino!

Felix: I wonder how Sergio Leone’s style and approach would work out in a children’s film.

Louise: Lars Von Trier, as children’s film is the only genre he didn’t try so far. The result would probably be slightly disturbing, and very interesting.