Leaving the congress centre after the interview, I’m walking down the stairs with Martin Vandas, producer of animated films, and I see how Katariina Lillqvist and Noro Drziak go the wrong direction and manage to get lost in 5 seconds. That is no coincidence. They are both animators. Animators in general can get lost quite easily in buildings, and in their own thoughts and fantasies. Especially for me, they stayed focussed all the time doing the interview. Ladies & gentlemen, I proudly present you, Martin, Katarina and Noro, aka the “Zlin Animation Jury”. 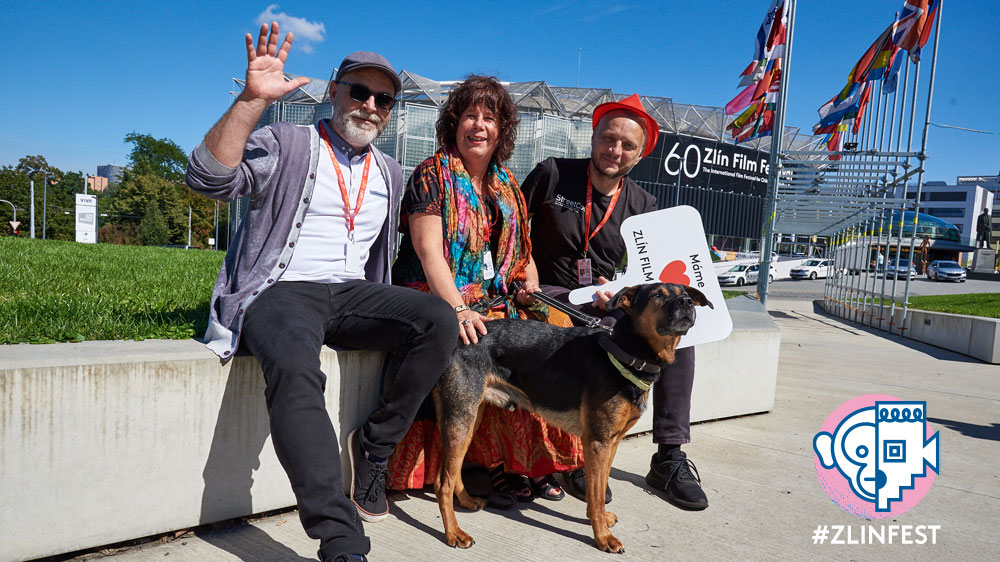 Let’s check how good you already know each other after 5 days of jury work.

Martin: We all knew each other before but now it is good to be in a jury together.

Who has been drinking the most?

Noro: Again that is Martin.

Martin: I am a producer and they both are animators, who are in general more introverted.

Who fell asleep most often during screenings?

Noro: That is probably me, but it was only for one second.

Katariina: Me too, only once, after that exquisite Italian lunch we had.

Katariina: Martin will be the grandfather of our future animated docs.

Martin: Katariina is the gipsy queen of fairy-tales and the mother of a nice dog.

Katariina: We both are owners of a similar type of street dog.

Martin: I met Noro when he was about to finish his master student’s movie and came too late to work in the school film studio. I offered him: we can move the studio to my house and prepare one room as your production unit.

How much have you been missing the festivals?

Martin: This is my second festival after the lockdown and you feel the people’s urge to talk and connect again, taking in account safety precautions of course. This is a great opportunity to catch up with others, and the fact that everything looks like normal again, is a great achievement.

Noro: I missed the festivals only a little bit, as an occasion to meet people.

Katariina: And for distribution! I just finished a new film and now we wonder where to present it. It would be sad to only present it online.

All of you have been in Zlin before. Noro, you even have been living here for many years. How do you feel about this down?

Noro: It feels like coming home for me, which makes me really happy. The place still looks so familiar, and even better than before.

Katariina: This town feels very familiar to me too. In Tampere, my hometown in Finland, we also had a shoe factory. I was here for the first time in 1990, and I am so happy now to see that young entrepreneurs have picked up again this shoe-making tradition. I‘m curious to see the results.

In your jury you have to watch approx. 45 short films in total, divided into the -6 and 6+ categories. Do you have any advice for the programming committee?

Martin: It is confusing to see the short films together with the TV-episodes. It feels somehow uncomfortable to compare them as for the TV-series we only get to see a small part of the entire programme. On the other hand, TV-episodes are often made under better conditions than student or short films.

Katariina: Also the educational programmes are hard to be compared with other films.

What does the selection tells you about the animation of today?

Martin: That films for very small children might be the most difficult ones to make. That audience is often underestimated. Children are clever, they are trained to watch and understand way more audio-visual content than we do. When making films for a young audience, you should see them as your business partners. Treat them with respect, and you will be respected in return.

Katariina: I have the feeling that the really good stories are missing. Whenever something becomes trendy, there is a risk that the focus easily gets lost. Many films about climate change are simply bringing up the topic. “Let’s have an ice bear, that is a strong symbol for climate change!” But by simply bringing the elements together, you’re not talking yet about a real change. The same with gender equality or other socio-political topics, lacking the strong narration.

Martin: I guarantee, with a strong narration, you will always be successful. That has always been the power of animation. But more and more when seeing films, I am confused. Knowing how much time and energy is invested in an animated movie, I wonder why you don’t bother to make a strong point.

Noro: And there were too many bears!

Then what animals are missing in today’s animation? Can you recommend one?

Katariina: I would like to see more ordinary street dogs.

Which animated character would you like to ask out on a date?

Katariina: In THE 7 KIDS, a Russian film in this year’s competition, a wolf is hired as an au pair for 7 little goats. It is a strong wolf with a Harley Davidson.

Noro: Definitely Jessica Rabbit. I don’t understand what she sees in this Roger Rabbit.

Which feature film director would you like to see making an animation film?

Katariina: I would like to see an animation made by Emir Kusturica, including the music.

Noro: I suggest Slovak director Juraj Jakubisko, who made rather surreal films full of imagination in the 1960’s.

Martin: I’m planning to make a feature film with Daria Kashcheeva (represented in Zlin with her short film DAUGHTER). I think she has all the skills to make a wonderful feature.

What about the situation for Czech animation?

Martin: As a member of the Association of Animation Producers, we are lobbying with the Film Fund to increase the support for animation and create opportunities for TV-series. For the animation industry, short films are the spirit, the seeds, and TV-series are the grain, that brings daily work for the animators and long term opportunities to develop ideas. For the shorts, the conditions are very good, we have a lot of young talents with extraordinary successful festival representations, but for the grain the Czech television is the crucial partner. For Czech TV, animation is like Cinderella or the Ugly Duckling, no slots are available. The problem is that animation requires such a long process. As a TV director, during your 6-years legislation you can start up new projects but you will not be there to even finish them.

Martin: Czech animation history is a good brand, a strong label. Now we should try to “make Czech animation great again”. Luckily we established good relationships with our Slovak companions.

Noro: For animated TV-series we might be doing a bit better in Slovakia, where national television is more supportive. Which creates jobs for young animators and on a longer term should establish a stronger industry.

Martin: I tell my students that “animation is always a co-production”. National projects are an exception. With such an amount of work and money involved, even for shorts, it is impossible to do it on your own.

Katariina: Over 30 years I have been doing co-productions with Finland, Sweden, the Netherlands, … but seldom with Czech partners. With the new generation of people working for Finnish television, maybe one day I will be able to make a Czech-Finnish co-production.