The Zlín Film Festival for the 60th Time.

Visitors can expect not only an attractive film festival, but also a spectacular celebration and a number of extraordinary surprises. 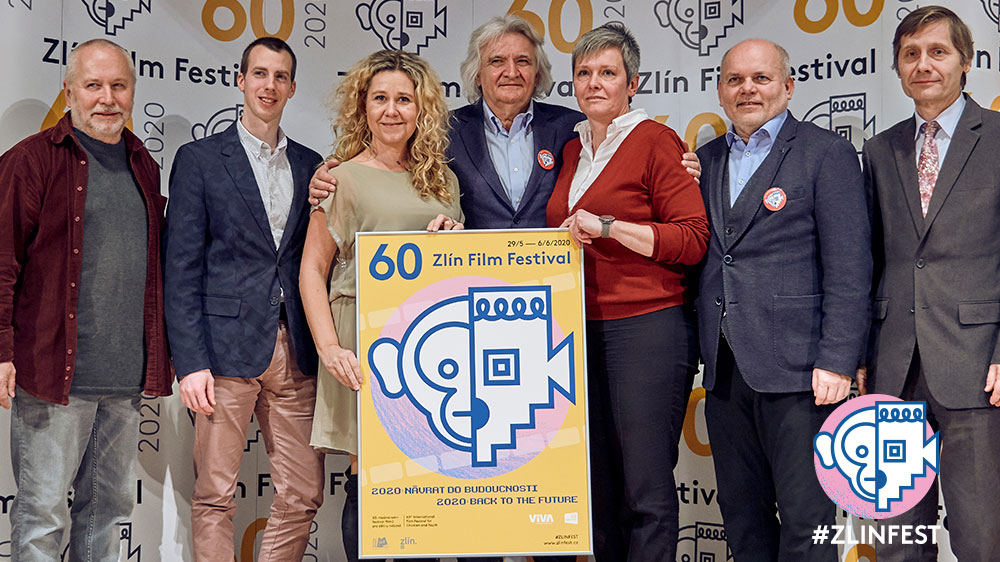 2020: Back to the Future, the announced theme of the 60th Zlín Film Festival, has also inspired the authors of the visual that the organizers of the festival unveiled today at the Congress Center in Zlín. It is again based on a monkey, albeit in a completely new form. Combining digitally modified drawings of a monkey head and a robot head created a new graphic element: the "Robo-monkey". The festival will take place from May 29 to June 6.

The sixtieth year of the oldest and largest film festival of its kind in the world will be in the spirit of the theme 2020: BACK TO THE FUTURE.

"Back" represents a respectable history of the festival and "the future" promises to fulfill the vision of its modern form developed through science, technology and education,"

The authors of this year's visual are again the artist Petr Nikl and designer Zdeněk Macháček. It has been based on combining the drawings of a monkey and a robot and thus creating a new whole: a graphically solid digi-icon ROBO-MONKEY.

"We want to prove to the public that a visual created combining the described elements will evoke an atmosphere of eternal desire to "touch the stars" – a message that can speak to every generation,"

In addition to the traditional COMPETITION and the section entitled FESTIVAL CLASSICS, the dramaturgy of the 60th festival will focus on films in a special anniversary edition called 2020: BACK TO THE FUTURE.

“This section aims to broaden the horizons of young visitors in the area of science and technology. The films will be dramaturgically divided into three groups: documentary films on science and technology , live-acted sci-fi fiction films for children and youth , and a section devoted to special effects in film,”

“In addition to the films themselves, this mini-section will be complemented by lectures for schools and the public, and will try to answer the question of how technology makes our lives easier for us, and vice versa, what dangers do we face from it,”

says Markéta Pášmová. The mini-section of science fiction films should provide young audiences with fun and adventure, as well as learning experiences and opportunities to expand their horizons. The most common theme, encounters with extraterrestrial civilizations, will be supplemented by stories about robots, exploring new worlds and alternative futures.

In 2020, one of the most important pioneers of cinematic tricks would have been 100 years old: American filmmaker and artist Ray Harryhausen, who created unique puppets for the films Clash of the Titans, Jason and Argonauts, and The 7th Voyage of Sinbad. This contemporary of Karel Zeman's (who would have turned 110) has inspired the directors Steven Spielberg, Peter Jackson, George Lucas, Tim Burton, and many others.

“We would like to pay tribute not only to him in the Magic of Film Tricks section, but also to other special effects creators who, with the help of the latest technology, have provided incredible film experiences to audiences over the years,”

This mini-section consists of films that were revolutionary in terms of special and visual effects. Special screenings of films such as Metropolis, 2001: A Space Odyssey, Jurassic Park, Matrix, and Gravity will be accompanied by an introduction by the experts Kamil Fila and Boris Masník.

The festival's program department and the special effects artist and film effects supervisor Boris Masník, who is one of the best experts in the Czech Republic and often also participates in projects abroad, have created a section dedicated to film effects.

“For this year's festival theme - and the sci-fi genre in general - film tricks are one of the basic means of expression. It is a pleasant challenge for me to introduce the festival's visitors to the history film tricks and to what goes on behind the scenes,”

“During my meetings with festival-goers, I would like to point out, among other things, that the film tricks carried out in our films haven't lagged behind in quality in terms of world film productions. And this is evidenced by the fact that Czech special effects specialists and companies are successfully cooperating and successfully building on the tradition established by Karel Zeman and our other special effects artists.”

A no less important theme of the festival, which will be reflected especially in the supporting program, is the celebration of the festival's 60th year.

“This important year, which rounds the impressive numbering line to the sixties, will not be without wonderful meetings, surprises and events. I believe our visitors will enjoy it,”

says Executive Director Jarmila Záhorová and she gives examples from the upcoming program:

“We will certainly please audiences during the opening of the festival itself in the form of a public opening on the Gahura Prospect; we are preparing a big children's party for the youngest of our visitors.”

There will also be an exhibition of large format crowd photographs from past festivals, a modern virtual gallery mapping the festival's history, a special festival time machine, and another activities. The history of the festival will also be commemorated by an upcoming documentary by Czech Television directed by Tomáš Luňák, a Zlín native.

A traditional part of the Zlín Film Festival will again be the auction of artistically rendered film clapperboards. The 23rd Clapperboard Salon will start on March 17 in Prague. CLAPPERBOARD TOUR 2020 will again have 5 stops this year – starting in Prague, it will then head out to Mladá Boleslav, Olomouc, Brno and Zlín, culminating in a traditional auction, which will take place on May 31 at the Congress Center.

For the fifth time, the film festival in Zlín will finish with the Festival Half-Marathon MONET + Zlín, which is scheduled to start on Saturday, June 6 at 4 pm, again starting at the Zlín Congress Centre.  Preceding this, at 2 pm, will be the popular Festival Family Run; it's a 1400-meter course designed for parents with children and for those who prefer shorter runs. It will start again on the main square at Náměstí Míru.