Film of the day: Los Bando

Even when they were young, best friends Axel and Grim dreamed of making musical history with their band ‘Los Bando Immortale’. One day they receive an invitation to take part in the Norwegian Rock Championship – and suddenly it seems that anything is possible. The only problem is, Axel can’t sing. And because Grim can’t bring himself to tell the truth, they end up on a musical road trip to the far north – along with Thilda, a 9-year-old cellist, and Martin, a rally driver. When they find themselves caught up in a hair-raising car chase, it becomes clear that the journey symbolizes an escape for each of them. With every passing kilometre the group of youngsters grows closer, heading triumphantly for the grand finale. 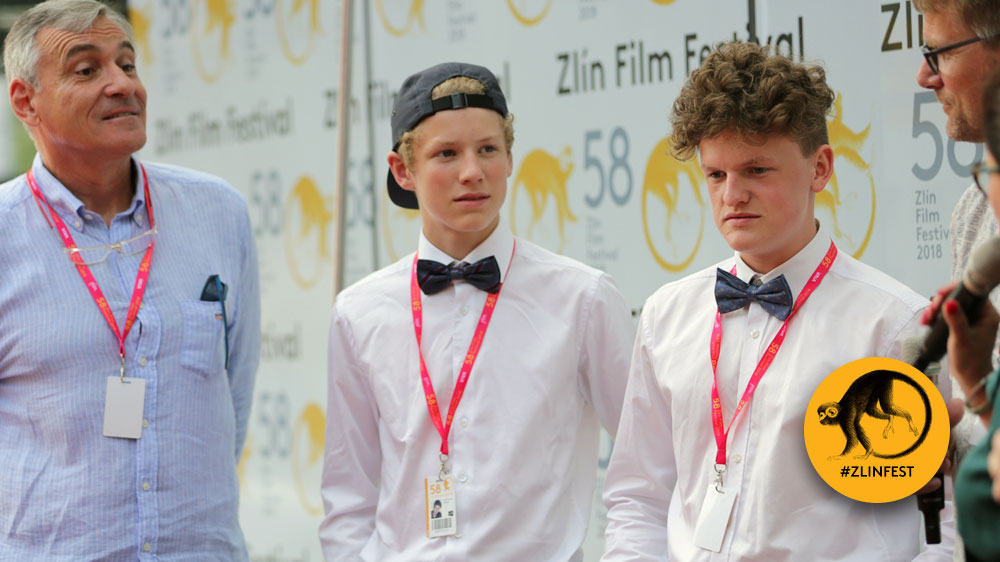 Film was directed by Christian Lo, norwegian screenwriter and director. He studied at the Surrey Institute of Art and Design in England, where his short thesis film Punktert (2001) was created. He's made several short films, e.g., Mouse Trap (Musefella, 2002) and Baluba Runa (2007). He made his debut with the family film Rafiki (Bestevenner, 2009) and continued in the same genre with The Tough Guys (De töffeste gutta, 2013).

This is your second collaboration. Two years ago you made a short film Fra mus til menn. How did you all meet?

We met during the audition for the short film “Fra mus til menn”. After that me and Tage got asked to audition for Los Bando. Both of us were fortunate to get the role, and we got the opportunity to work more with each other and Christian, which was great!

The film is about rock’n’roll. I don’t need to ask you if you are rock fans. It is obvious from the film. But let me ask you, Tage and Jacob. Did you know how to play the instruments before or did you have to learn it for the shooting? And guys, tell me, who is your rock idol?

Jakob: I don’t have a rock idol. It’s kind of sad but I almost never listen to rock, even though the music in the movie is really cool. I played the drums before and Tage played the guitar so we had to „switch instruments! for the movie. But it was really cool learning a new instrument and whenever we weren’t shooting we switched back and jammed with our „original“ Instrument

Tell us about the shooting. Any funny or unforgettable scenes? I bet you must have had looooots of fun making Los Bando.

I don’t think it’s a rock idol, but as a kid I really looked up to Michael Jackson. I have always enjoyed dance and I think the way Michael Jackson used to dance is really cool.

It was really fun traveling around seeing Norway. It made me understand how much of a beautiful country Norway is!

Jakob: The shooting of the film was incredible. To drop out of school to shoot a movie, when you love acting is a really good feeling. I must say that seeing Norway and meeting all the incredible people that worked on this movie was the best thing! I personally loved the scenes where I was singing and jamming about Linda, because some of the phrases where made up on the spot. And the funny thing is that many of the phrases made the cut ;)

How about Tiril Marie? Did you boys take good care of her?

Jakob: Tiril is an amazing person we got to know really well. At the end of the shoot she almost felt like our little sister.

Tage: Yeah we had a lot of fun! Tiril is really nice.

If you had a band, what would be its name?

Tage: I don’t know what my band name would be, but I know Christian had a band named “Oil Splash” which I think is a cool name. Jakob: Band name: Curl Band (because I have curls ha-ha)

Have you ever been to the Czech Republic? What are you looking forward to most?

Los Bando is another cooperation with the editor and writer Arild Tryggestad. How did you meet? You are a perfect duo!

Me and Arild met at Danvik Folkehøyskole, which is kind of a foundation year between gymnasium and university, and we have made films together ever since. Arild dreamt of making a road movie and I dreamt of making a band movie since I played in a rock band when I was young and I love rock. The result was a film about the band Los Bando Immortale. I think the script Arild wrote was really good. I feel Lucky to have him as my colleague and friend.

It’s been nearly 10 years since your debut film Rafiki. How different is the genre of children’s film from then? Has it changed or did it stay the same?

It seems to me that more and more of the children’s films are based on books or already established concepts, films based on original ideas are more and more seldom. I think it’s important for a vital children’s film genre that we have both! So my wish is that distributors and those who finance films dare to believe in original scripts.

What should any children’s film have?