The Cinema-train is a traditional part of ZLÍN FILM FESTIVAL's supporting program, which is organized each year in cooperation with the companies Czech Railways and ČD Cargo. This year the Cinema-train will set off on its twelfth journey and will cross the entire country screening fairy tales for children. The project regularly enjoys an enormous amount of interest from the media, including Czech TV, which is the main media partner of this event. 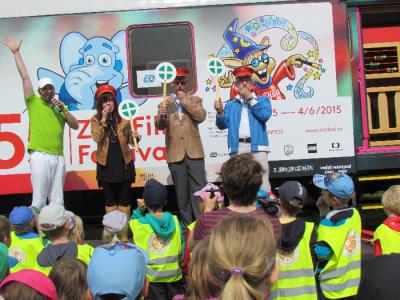 Projection Car – a railway car whose interior has been converted into a screening hall where fairy-tales are screened. Screenings are 12 times per day and free of charge.
The Toy Car – a car that has been converted into a play room where the kids can entertain themselves while waiting for screenings.
Historical Car – This car is educational in intent and lets children look at the history of railways and the cities in which we live.

The project aims to bring this non-traditional experience as well as children to smaller towns where there is frequently a lack of cultural recreation and to present them with some of our famous film productions.

The 12th year?  Bigger in all directions!

The Cinema-train will arrive in Zlín on May 29 and start showing films at the Zlín-střed train station. In the days following this the Cinema-train will serve as a mobile invitation to the ZLÍN FILM FESTIVAL and through it visitors will be able to get a taste of the festival.